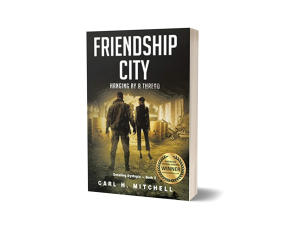 TORONTO, ONTARIO, CANADA, July 19, 2022 /EINPresswire.com/ -- Friendship City: Hanging By A Thread is a definite treat for readers that embarks into the journey of the protagonists NYPD Detective Nick Garvey and Lenora Allison, president of the battered and reeling United State

The duo stand side by side to battle the remnants of the vicious and terrorizing World Council. Together, the pair faces a man-made murderous plague and the total annihilation of the beloved Friendship City.

The story is set for a twist when president Lenora Allison successfully destroys the first plague, upon the realization that a second and more deadly threat appears, leaving Lenora and Nick to question their capability to defeat the new threat.

Ishmael, the mysterious new leader of the murderous World Council, has decided to destroy Friendship City which tears the hearts of the heroes of the story. The determined NYPD officer is set to discover the hiding of the notorious leader; however, Ismael finds Nick first, along with the capture of Lenora and his family. The author leaves readers at the edge of their seats with every page consisting of a revelation and a thrilling surprise.

Carl H. Mitchell’s passion for writing began in his early years. The Hunchback of Notre Dame by Victor Hugo, The End of Eternity by Isaac Asimov and The Old Man and the Sea by Ernest Hemingway served as his inspiration. The author was born in California and earned a bachelor’s degree in Electrical Engineering from Stevens Institute of Technology in New Jersey. Mitchell had an astounding career for 35 years at IBM as an engineer, programmer, and manager.

Read more about the action-packed book Friendship City: Hanging By A Thread by purchasing his book on Amazon.