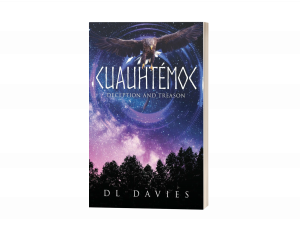 YORBA LINDA, CALIFORNIA, UNITED STATES OF AMERICA, July 8, 2022 /EINPresswire.com/ -- It is quite true that when a world in a fiction closes, it feels as though a vacation trip is over. Readers of the Cuauhtémoc series can totally relate, because after the rapid succession release of the first three books, author DL Davies finally releases the last one. A 300-page book of the 18th year of the Descending Eagle.

Cuauhtémoc: Deception and Treason, published in the same year and month as with the rest of the series, is the last book of the book series. It covers the beginning of Cuauhtémoc’s 18th year, where he gains more and more paranormal abilities, such as teleportation of himself, any item, and anyone to reach any corner of the Earth. The boy emperor also learns to converse with both Christian and pagan gods coupled with reading people’s auras, which allows him to know their intentions.

Among the many revelations in the last part of the series, the protagonist boy and his entire empire becomes so matured that they end up rising to global supremacy, striving for betterment of the society through welcoming everyone, promoting respect for everyone as this is what Cuauhtémoc stands for.

DL Davies was born in Susanville, California in April 1943. When he was young, he moved frequently so he grew up in different states in the US, including Arizona, Florida, Nevada, Idaho, Montana, and California. He has a lot of hobbies, but one that sticks out the most is creating stories in his head.

Cuauhtémoc: Deception and Treason is available on Amazon.com.