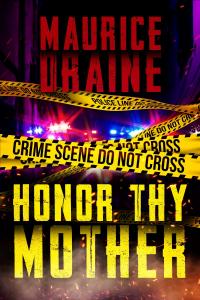 A sexual predator is on the loose; the Minneapolis Police Department has to take action before another woman becomes a victim.

MINNEAPOLIS, MINNESOTA, UNITED STATES, July 27, 2022 /EINPresswire.com/ -- Maurice Draine debuts his book ‘’Honor Thy Mother’’ in which rising sexual assaults in the city of Minneapolis alarm the citizens. The stakes are high, and who will save them from this predator is worth exploring.

“Honor Thy Mother’’ illustrates the story of a beautiful nineteen-year-old named Lauren Patrick (a Black woman) who leaves home to attend a party; however, a detour turns her life upside down. On her way, she is attacked by a sociopath who knocks her out and sexually assaults her. Her party night turns into a nightmare, and she wakes up in a hospital. After a few months, she endures a moral dilemma of whether to keep or abort the pregnancy as a result of the attack. But against her family and friends’ objections, she decides to keep the baby, and a life is saved.

The story is then fast-forwarded to twenty-five years later, where the readers are introduced to Rue Patton, a rookie cop who is also the daughter of Lauren Patrick. The main protagonist, Rue, 25 years old, is a naïve and shy woman who strives to make her name in the police department of Minneapolis. To solve the mystery behind the rising number of sexual assaults, Rue is determined to hunt down the predator by any means necessary. But little does she know that in locating him, she will uncover an earth-shattering discovery about her mom that will change her life forever.

A quest that started with a search for a predator turns into a personal vendetta. The fate of Rue gets intertwined; she now has to bear a black mark on her soul and still catch the culprit terrorizing Minneapolis.

The series of unfathomable events are yet to be explored in ‘’Honor Thy Mother.’’ The author has precisely used vivid imagery with an air of mystery around the characters, which makes it a unique read in every aspect.
About the Author:

Maurice Draine is a former insurance agent licensed for over 12 years and the author of several books, including his first novel Honor Thy Mother. He has a passion for writing suspense novels based on psychological thrillers and crime mysteries. He spends most of his time writing and creating new plotlines for future novels. Talking to himself (out loud) about plotlines and fulfilling the demands of suspense, thriller, and mystery fiction fans from all over the world.