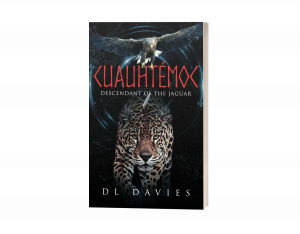 Cuauhtémoc: Descendant of the Jaguar

YORBA LINDA, CALIFORNIA, UNITED STATES OF AMERICA, July 12, 2022 /EINPresswire.com/ -- There is nothing more exciting than the third book of a book series. It is where events climax and calm down; where things finally make sense. This runs true for D. L. Davies’ Cuauhtémoc: Descendant of the Jaguar, the third and second to the last book of his Cuauhtémoc series.

Cuauhtémoc: Descendant of the Jaguar wraps up Cuauhtémoc finally emerging as the Greatest Mayan, ruling Maya with wisdom and love. He learns more about his own personal history and discovers what it is to be The Chief Jaguar Priest. And while greatness unfolds in the pages, the book also tackles some cultural taboos, or facts of the past, that may disturb the book series’ readership. But, really, what is a book if there is no challenge, right?

A comment from BlueInk Review says, “While a young adult market appeared to be the target audience for the first Cuauhtémoc book, some revelations in the current novel may be a bit strong for young readers.”

Cuauhtémoc: Descendant of the Jaguar is a one of a kind read. Perfect for those who have curious minds and are of age, wanting more of the unconventional. It is creative, with a sense of purpose; a perfect gift for those who need a literary vacation.

Born in California, D. L. Davies moved all around frequently from one state to another growing up. He served in the army for six years, stationed in Germany. Having been exposed to different environments, his hobbies grew along. One of them is creating stories in his head about tales of time and places that mostly consisted of the Earth and of what it might have been in the past, the current, and in the future.

Cuauhtémoc: Descendant of the Jaguar, as well as the previous books in the series, are available on Amazon.com.