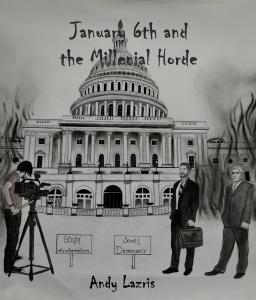 Read the Book of the Year nominee!

"I couldn't get enough of the intricate, thrilling plot of January 6th and the Millennial Horde," writes the San Fran Book Review.

In an era where entertainment. . . is increasingly and ironically reflective of sociopolitical ills, Lazris just cuts through the crap and delivers something bighearted and unafraid,”
— The Magic Pen

COLUMBIA, MD, UNITED STATES, July 10, 2022 /EINPresswire.com/ -- Read the Magic Pen's book of the year nominee, writing: ""I like the fact Lazris doesn’t sell out to PC agendas, and is willing to shoehorn his own, firsthand perspective, political points of view, and distinct brands of thought into the mix. The result is something that feels uncommonly fresh. In an era where entertainment in literary, cinematic, and televised forums is increasingly and ironically reflective of sociopolitical ills, Lazris just cuts through the crap and delivers something bighearted and unafraid of its potential provocations of inquiry." It's a 5/5 must read from the San Francisco Book Review that said: "I couldn't get enough of the intricate, thrilling plot of January 6th and the Millennial Horde.... The book's characters are the type you love and hate at the same time, which reflects the sort of duality that exists in a situation involving bad deeds carried out by well-meaning people." Says the Hollywood Digest: "there’s no denying the passion Lazris has is infectious. January 6th and the Millennial Horde instantly pulls you in. There’s never a sense of narrative or even ideological slack. Everything is tightly wound, all coiled up like a spring, maintaining a sense of tension that strangles you in a psychological vice. The result is something that, provided you have an open mind and a willingness to hear, entertains, thought-provokes, and even can enrage (in a good way)."

See what all the buzz is about in this dystopian novel that asks what may have occurred if we insert two very passionate and driven fictional characters into the national narrative after the January 6th Capitol attacks. Unwilling to tolerate the push back of “anti-lifers” and “anti-democrats” against the country’s struggle with COVID and Trumpism, Congressman Jim Depich and college student Mary Lou Kramer thrust America into a violent and retributive spiral that dismantles science and democracy in an effort to rescue them from perceived foes. The book follows Jim Depich’s rise from a first term Pittsburgh congressman to the most powerful man in the world, dragging America’s leaders, students and ordinary people, and the nation’s very soul into the monsoon he creates to save America from itself. Fictional versions of major figures including scientists, federal agents, politicians and TV doctors take us on a frightening and funny journey through the alternative reality that Jim Depich’s crusade against untruth and misinformation weaves. With mock trials, hangings from the Capitol, and nuclear destruction of nations, this America is one that might have been and still can be.