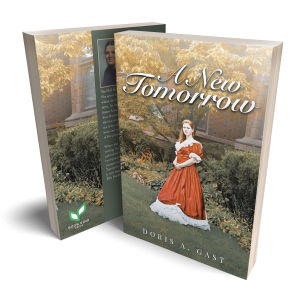 “A New Tomorrow” from Book Vine Press author Doris A. Gast is a historical handbook about the Ellis family and their trials during the Civil War.

“A New Tomorrow” is a historical book. It is the second book I have written on the Ellis Family. My first book, “Sugar Camp” is a contemporary book. I am currently working on my third, as yet unnamed.”
— Doris A. Gast, Author
PALATINE, IL, UNITED STATES, July 25, 2022 /EINPresswire.com/ -- “A New Tomorrow”: an intriguing novel that tells a story of a patriarch with two of his sons on the opposite sides of the war. It is a gripping account that will hold the readers’ interest to read until its last page as the author brings the readers to the most enthralling event that happened in the life of the patriarchal family. “A New Tomorrow” is the creation of published author Doris A. Gast, a clerical assistant who loves history, genealogy, and traveling.

Doris writes, “‘A New Tomorrow’ is a historical book about the Ellis family and their trials during the Civil War. Cooper Ellis is the patriarch whose family is divided by the war between the states. The war has cooper’s sons pitted brother against brother; even though neither of them believes in slavery, each believes in a state’s right to govern itself. Cooper’s son, William, is captured by the north and imprisoned at Camp Douglas in Illinois. William joins his fellow prisoners in one of the greatest escapes of the Civil war. He and a neighbor and friend gallantly fight the ravages of a harsh winter while eluding the northern troops looking for them.

Thurman, another of Cooper’s sons, leads a company of Northern soldiers to the family homestead in Kentucky, where they make camp for several days on Ellis family land.
Bonner, the youngest of Cooper’s sons, follows his heart into love, marriage, and the mystery of who is trying to harm his beloved.”

Published by Book Vine Press, Doris’ new book is the second book she has written about the Ellis Family.

With this book, the author gives readers the most unforgettable reading experience as they are witnessing the life of a family who never believed in slavery, but their two sons were separated because of a conflict, the Civil War.