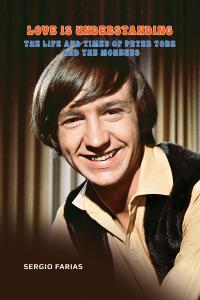 The cover of Love Is Understanding: The Life and Times of Peter Tork

Peter Tork of the Monkees finally gets his own biography.

NEW PROVIDENCE, NJ, UNITED STATES, July 31, 2022 /EINPresswire.com/ -- When struggling folk musician Peter Tork (born Peter Thorkelson) won an audition to become a cast member of a television sitcom about a rock and roll group, The Monkees, it proved to be a mixed blessing. On the one hand, the television show was not only a big hit in the 1966-67 and 1967-68 seasons, but the manufactured group the Monkees released genuine records that sold millions and soared the charts. On the other hand, the gifted Tork was subjected to criticism and ridicule from the press because cynics considered the Monkees to be nothing more than a blatant ripoff of the phenomenally popular Beatles and because (initially) the group members were not allowed to play musical instruments on their own records. To make things even worse, Tork played a nitwit on the show. People wrongly assumed he was the same buffoon off the air when in fact he was an intelligent and sensitive human being. And when the show was cancelled and the group broke up, Tork became a pariah in the show business industry.

Now Sergio Farias's Love and Understanding: The Life and TImes of Peter Tork and The Monkees reveals all the highs and lows of the whole story. This brand new book enlightens readers not only on the authentic talents of Peter Tork- both as a musician and as an actor- but also the significant role his group the Monkees played in pop music and in television comedy. It is an amazing tale of an individual who underwent personal and professional tribulations but who ultimately endured and is still remembered and cherished in popular culture today. And this book should be cherished by anyone who gets the opportunity to buy and read it. It is now available in paperback at https://bearmanor-digital.myshopify.com/products/love-is-understanding-the-life-and-times-of-peter-tork-and-the-monkees-paperback?_pos=1&_sid=95a1b3740&_ss=r and in hardback at https://bearmanor-digital.myshopify.com/products/love-is-understanding-the-life-and-times-of-peter-tork-and-the-monkees-hardback?_pos=2&_sid=95a1b3740&_ss=r