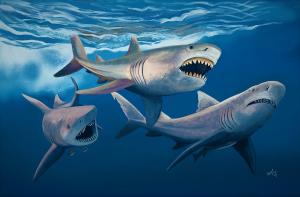 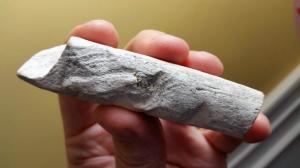 Specimens from the collection of indie paleontologist Max Hawthorne indicate Megalodon nurseries were raided by other sharks that killed and ate young "Megs".

. . . for the first time we now have solid evidence that Hemipristis predation on Megalodon pups took place, and not just in Panama.”
— Max Hawthorne
NEW HOPE, PA, US, July 23, 2022 /EINPresswire.com/ -- The extinct mackerel shark Otodus megalodon lived from approximately 23 to 3.6 million years ago, and at lengths of at least 50 feet is widely accepted as the largest carnivorous fish of all time. But was anything eating it?

Award-winning author and vocational paleontologist Max Hawthorne – touted for his bestselling Kronos Rising series of sci-fi thrillers – has fossil evidence proving what some paleontologists have long suspected. Life for a Megalodon shark was fraught with hazards and even the mega shark’s babies weren’t safe from predation.

Despite doing paleontology research as a hobby, Hawthorne has founded several paleontological theories that are accepted by many. The first was his solution to the mystery of how four-flippered plesiosaurs swam – the animation for which has been utilized by multiple museums – and the second demonstrated why plesiosaurs had such long necks. The latter was proven by a study of snake-neck turtles which use hunting strategies similar to that of long-necked plesiosaurs. i.e., sneaking up on fish from behind to overcome their lateral lines.

When it comes to the question of baby Megalodon sharks falling prey to other predators, Hawthorne stated: “The theory of mother Megalodons giving birth to pups in warm, coastal regions has been around for a long time and it makes sense. We know white sharks behave similarly. Moreover, I’m a passionate angler and have often fished for Goliath grouper, AKA Jewfish. The carnivorous Goliath is one of the world’s largest bony fish. Adults of the reef-dwelling species can weigh 800 pounds and have few natural enemies. But baby Goliaths are vulnerable to predation from larger predators, especially sharks. As a result, they tend to stay within the shelter of the mangroves until they’re big enough to head out to nearby reefs and find a place for themselves. The same thing would’ve applied to baby Megalodons. Out in the open ocean, a 2-3-meter (7-10 feet) Megalodon would find itself surrounded by a host of other predators, including larger members of its own species, its forty-foot cousin, the mega-tooth shark Otodus chubutensis, and the quite common and lethal giant mako, Cosmopolitodus hastalis, which reached 8 meters (25 feet) in length and was the ancestor of the modern great white. All of these could and would kill and eat a young Megalodon venturing into open waters. Hence, the warm-water nurseries where pups remained until they reached a certain size.”

But were the young sharks safe in their nurseries? Hawthorne doesn’t think so. “A 2010 paper by Pimiento et al showed evidence of the extinct weasel shark Hemipristis serra prowling known Miocene Megalodon nurseries in Panama. This has caused researchers to surmise that the 6-meter Hemipristis may have been there to feed upon Megalodon pups.”

When asked if Hemipristis was capable of killing and eating young Megalodons, the author replied, “Absolutely. First, they were twice the size and most likely hunted in groups. Second, we have to consider their teeth. The teeth of Hemipristis have enormous serrations and bear a marked resemblance to those of the extant tiger shark, only they’re bigger and nastier. Tigers’ teeth are known for being able to chew through tough materials, including the hard shells of sea turtles. They also have a well-earned reputation for killing and eating smaller sharks. It makes sense that the type of convergent evolution we see in these two species’ teeth was the result of a similar diet.”

But is there any hard evidence that such predation actually took place? According to Hawthorne, the answer is a resounding yes. “Finding fossil evidence to prove one shark ate another is difficult, since cartilaginous skeletons almost never preserve. However, I have a few specimens in my collection from the Hawthorn formation (5-12mya) in north-central Florida. The first is a section of what is likely dugong bone. It is heavily chewed and the course serration marks it bears overwhelmingly suggest that it was preyed upon by Hemipristis. That, and an established presence of snaggletooth teeth, show the shark was both there and actively predating.”

“The second is a matched pair of Megalodon teeth, an upper anterior tooth measuring only 32mm (1.25 inches) and a smaller lateral tooth. These came from a neonate – a baby. They were found together, and in the same formation as the piece of dugong bone.” Asked as to the significance of the teeth, Hawthorne expounded. “Normally, one would think these teeth were lost during feeding. And they were, but I don’t think the ‘Meg’ was the one doing the eating. The larger anterior tooth has numerous gouges in it, ones that indicate teeth with huge serrations repeatedly bit down, damaging the enamel. One set of tooth scores are quite deep and form an arcing pattern, overwhelmingly suggesting the savaging bite of a large Hemipristis. This means that the larger predator was actively feeding on the young Megalodon, to the point it had the smaller shark’s head and jaws in its mouth and was biting down and shaking it as it ripped it apart.”

In terms of whether this type of established predation contributed to the monster shark’s extinction, Hawthorne concluded, “Well, for the first time we now have solid evidence that Hemipristis predation on Megalodon pups took place, and not just in Panama. Undoubtedly it was going on for millions of years. Did this drive the ‘Meg’ to extinction? I doubt it. Still, combined with loss of habitat and the extinction of the smallish baleen whales that it relied almost entirely for its hunting/scavenging lifestyle, I’m sure it didn’t help. It is believed that extant cheetahs are all descended from a single pregnant female. So, who knows? Maybe a single female Megalodon pup surviving a Hemipristis attack and one day reproducing could’ve made a distance. We’ll never know.”