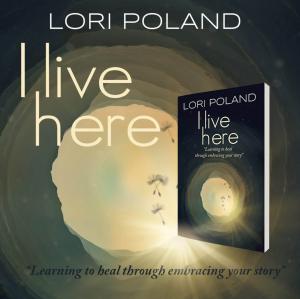 In this personal and heartfelt memoir, readers follow Polands’s harrowing childhood trauma, road to healing, and adulthood evolution through advocacy.

I always knew I wanted to tell my full story, when I was ready.”
— Lori Poland
DENVER, CO, UNITED STATES, July 11, 2022 /EINPresswire.com/ -- On July 11, "I Live Here" a personal and heartfelt memoir by high-profile child abduction survivor, advocate, and now author, Lori Poland, was officially released nationwide. In this personal and heartfelt memoir, readers are taken on a journey through Lori’s harrowing childhood trauma, road to healing, and adulthood evolution to the advocacy she now does through founding The National Foundation to End Childhood Abuse and Neglect (EndCAN).

Prior to the days of Amber alerts, Lori Poland was one of the first child abductions to make national headlines because of her tender age and the violent nature of the crime committed against her. At just three years old, Lori was kidnapped from the front yard of her Colorado home, taken to the remote foothills – where she was sexually assaulted; and then dropped into a 15-foot sewage pit where she remained for four more days until, by the grace of God, hikers located her. Not even old enough to read, write, or understand how to tie her own shoes, Lori was now the victim of an unimaginable tragedy.

Lori’s childhood experiences became national news, contributing to the creation of the U.S. National Sex Offender Registry. Now, she commits herself to fighting the silent horrors of abuse and neglect that tens of millions face daily.

Decades in the making, this personal and heartfelt memoir is powerful, moving, and encouraging for any reader looking for hope – her resilience will inspire many. Poland recounts what happened during her “missing” days, and chronicles her memories of identifying her abuser, facing his imprisonment and release, and tackling people’s sometimes-unpleasant reactions.

“I always knew I wanted to tell my full story, when I was ready,” said Poland. “What I didn’t expect, was that it would be blended with both fear and excitement – a fear of being vulnerable, but an excitement in showing the world that none of us are alone. Our journeys are what make us who we are, and what we choose to do with them, can create real change.”

Available on Amazon and Kindle nationwide. Proceeds from book sales will benefit The National Foundation to End Childhood Abuse and Neglect (EndCAN), the foundation that Lori Poland and child abuse expert Richard Krugman, MD, founded to raise awareness of the physical, mental, and public health impacts of child abuse, while supporting survivors.

“Nearly 40 years after her kidnapping, strangers still hear her name and remember – I know I personally think about that day often,” said Terry Sol, the 911 operator that dispatched the first responders to the location she was found. “By her telling her story now, we can make sure that she (and many other survivors) are never forgotten.”

About Lori Poland
Lori Poland, MA, LPC, RRT, is a therapist, speaker, and mother of three. She is CEO and co-founder of The National Foundation to End Child Abuse and Neglect (EndCAN). Lori lives in Colorado and spends her time traveling across the country speaking on hope, healing, and possibility.