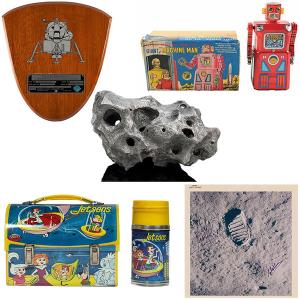 Many American baby-boomers are nostalgic about the 1960s and the space race. The antiques experts at Kovels share their Top 5 space collectibles.

CLEVELAND, OHIO, US, July 27, 2022 /EINPresswire.com/ -- For collectors and the team at Kovels.com, space memorabilia opens up memories of Apollo 11 landing on the moon, or George Jetson flying to his in-the-sky home in a glass pod. This week marks the anniversary of man landing on the moon, which means auctions and websites are highlighting space collectibles. Whether Apollo or Gemini program items, NASA memorabilia, moon rocks, meteors, space robots or items being sold from Elon Musk’s “SpaceX” flights, the opportunities are as vast as, well, outer space. The “Space Race” between the United States and the Union of Soviet Socialist Republics (USSR) began on Oct. 4, 1957, when the USSR launched Sputnik, the first artificial satellite to orbit Earth. Ultimately, the “race” finished on July 20, 1969, when Apollo 11 landed on the Moon. Space travel continues with the battle of the billionaires starting to explore tourism in space. The recent creation of a 6th independent U.S. military service branch, the “Space Force,” has brought it back to mainstream conversation.

Here are Kovels’ Top 5 picks for space-related artifacts and collectibles and their out-of-this-world prices:

Moon dust: Moon dust from the Apollo 11 Lunar mission was misidentified and sold in a US government forfeiture auction for $995. The lucky purchaser sold it a few years later for $1.8 million.

Gang of Five robots: Any member of the gang of five robot sells for high prices. The mechanical robots were made in Japan in the 1950s and early ’60s by Masudaya. They include: Machine Man, Radicon, Giant Sonic, Non Stop and Target. A mint in the box machine man robot, found by a man while cleaning his mother's attic, sold for $159,900 in 2020.

Jetsons collectibles: A vintage 1963 The Jetsons lunch box and thermos brought $3,500 in 2021, more than 7 times its high estimate. The lunch box is lithographed tin and made by Aladdin.

About Kovels
Terry Kovel and Kim Kovel provide collectors and researchers with up-to-date and informed information on antiques and collectibles. The company was founded in 1953 by Terry and her late husband, Ralph. The Kovels have written over 100 books, including their annual Kovels’ Antiques & Collectibles Price Guide, now in its 54th edition, as well as dozens of leaflets, and three series about antiques for television.

Kovels.com, online since 1998, offers a bird’s-eye view of the market with news, information and over 1 million prices. Readers will find auction reports, readers’ questions with answers, a marks dictionary, and identification guides covering antiques and collectibles from 1750 to 2010. Also included is the digital edition of Kovels On Antiques & Collectibles Newsletter with 47 years of archives. To stay in touch, subscribe to Kovels’ free weekly email, Kovels Komments, at Kovels.com.