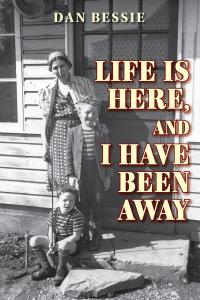 I read the book in the space of two weeks, and I found Mary walked with me... She was a living, breathing woman who was working through her life, and I felt her courage influence mine.”
— Beverly Taylor, coach, counselor, and trainer
RICHMOND, VIRGINIA, UNITED STATES, July 27, 2022 /EINPresswire.com/ -- Belle Isle Books of Richmond, Virginia, is pleased to announce the upcoming release of a new memoir/biography, Life Is Here, and I Have Been Away, written by Dan Bessie.

Most of the people who remember Mary Burnett remember her as a successful and influential woman in her community, and a champion of the youth. But in her thirties and forties, Mary struggled with depression that eventually led her to voluntarily commit herself. Now, through his careful curation of her own journals, her son tells her story of her determined effort to reinvent herself, reclaim her life—and rescue her nine- and six-year-old sons from a harsh all-boys boarding school. Moving and inspiring, this compassionately written book exposes how people fall apart—and how the motivating force of love can nevertheless drive us to overcome our trauma and reunite ourselves and our families.

A loving portrait of a mother, deftly painted by her son, Life Is Here, and I Have Been Away is scheduled for release on August 26, 2022.

When Mary Burnett finds herself at the very end of her rope, she musters the courage to repel her suicidal demons and commits herself to psychiatric care. And so, her life-saving journey begins—one she vows to take without self-deception, as if looking into a truth-telling mirror.
As she rereads decades of her old journals about long-forgotten incidents, the past comes alive—the good times and the bad: growing up with a petulant mother, her hopes for romance dashed when her intended reveals his homosexuality, two failed marriages, the birth of two sons while living in poverty, and finally, a third husband facing the death penalty.

Resolving her long stream of memories and banishing self-doubt, as she completes therapy, Mary zeroes in on three goals: to retrieve her sons from a Dickensian boarding school where relatives have placed them; secure a home for her little family and see her boys launched into the world as self-assured young men; and to find a way (in her own words) “to be of use, to serve some purpose in this life.”

In Life Is Here, and I Have Been Away, Mary Burnett’s son Dan Bessie weaves his mother’s narrative with his own perspective, and in so doing explores exactly how one woman was able to reinvent herself and rebuild her life.

Dan Bessie was born in rural Vermont, where his parents eked out a hardscrabble existence during the Great Depression. His early years were also spent in New York, Pennsylvania, Connecticut, and finally, Southern California. Following high school, Dan became a shipboard steward in the merchant marine, a longshoreman, and an automobile assembler. He worked at various factory jobs to support his wife and children until 1956, when he realized his childhood dream of becoming a cartoonist.

Following an apprenticeship at MGM Studios working on Tom & Jerry, Dan enjoyed a more than forty-year career in the industry, animating TV commercials and Saturday morning children’s programs like The Marvel Superheroes, Spider-Man, and Linus the Lionhearted. When Dan transitioned to live action, he directed a series of patient advice films for doctors’ offices. Between 1970 and 1975, he ran his own studio, producing films (including several award winners) for schools and libraries, and co-produced the feature Executive Action (starring Burt Lancaster), which dramatized the assassination of JFK.

Dan relocated to Santa Cruz, California, in 1978, and until 1995, he continued to write and direct educational and TV films, including the highly successful Peter and the Wolf, featuring Ray Bolger (Scarecrow in The Wizard of Oz). Between 1986 and 1987, Dan wrote and directed Hard Traveling, a feature film that recalled an incident in his mother’s life. By 2006, Dan had authored three published titles and illustrated books written by his then partner, Helen Garvy. The same year, Dan and his wife Jeanne Johnson moved to southwestern France, where they both continue to write and Dan creates cartoons.

Belle Isle Books, an imprint of Brandylane Publishers, Inc., is an independent press located in Richmond, Virginia that has published books since 1985.
___________
Life Is Here, and I Have Been Away (paperback, 446 pages, $24.95) is available for pre-order from Amazon, Barnes & Noble, and other fine booksellers. Kindle e-book (retail $4.99) forthcoming.