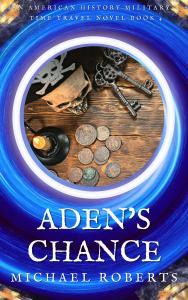 Aden’s Chance is the fourth book in his Pale Rider series. Like the trilogy which precedes it, Aden’s Chance continues the story of the Pale Rider character, a man sent into the past to help the colonists win the American Revolution. Readers will be entertained from the first page at this creative and unconventional approach to time travel and alternate historical fiction.

In this most recent book, Thomas Cain must travel to the War of 1812. Initially he is supposed to help General Andrew Jackson achieve victory, but he is side-tracked when a dear friend tries to change the tides of history and finds himself in trouble. Thomas Cain is the only one who can save him.

“Bravo to the author for an entertaining read and utilizing the real life historical characters without dishonoring them,” one reviewer cheers for the series. Other reviews call the series “Exceptional,” “A Great Read,” and “Fantastic Alternate History!”

Michael Roberts first conceived the idea after watching the popular musical “Hamilton,” and sketched out the first three books. The more he worked on them, more ideas about possible avenues and plot ideas came to mind, creating rich settings, engaging characters, and the potential for several additional books in the series.

ABOUT MICHAEL ROBERTS
Michael Roberts is a Police Officer in California. He also served seven years in the United States Marine Corps, where he operated an Amphibious Assault Vehicle as a crew chief for four years and then served with the Marine Security Guard detachment, guarding American Embassies around the world. He lives with his wife, Michelle, a college professor and also an author, and their five children.

For more information, including how to sign up for Michael’s free newsletter and receive release and book information, visit https://www.subscribepage.com/k8e0d9 and connect with him on linktree: https://linktr.ee/sifi_author_michael_roberts