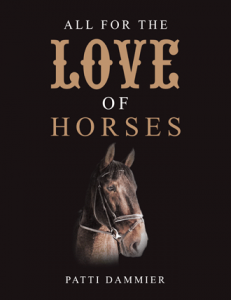 NEW BOOK: All for the Love of Horses

A reflective review of cheerful and funny horse stories through a historical lens. with included photographs that convey the various light-hearted moments.

Must-Read Books for Anyone Who Loves Horses”
— Patti
ROY, WA, UNITED STATES, July 23, 2022 /EINPresswire.com/ -- About the Book
This story began in a small community on rural Long Island, continued to Europe, and returned to the United States to the place that was her dream. It was always author Patricia Dammier’s vision to be able to look outside and see her beloved horses; not to worry about finding the next boarding stable. In All for the Love of Horses, she shares her story about all the wonderful animals and people that comprise more than thirty-five years of traveling through Europe to return to her farm in the United States. Dammier offers a reflective review of the cheerful and funny stories through a historical lens. The stories recount the thoughtfulness and generosity of others as she pursues her dream. The included photographs convey the various light-hearted moments of Dammier’s journey but also document the dedication it takes to accomplish any difficult skill or goal.

About the Author
Patti Dammier studied equestrian disciplines in Spain, Germany, Portugal, and England while teaching elementary school overseas. Many of the story situations described in this book are based on her true-life experiences. As an equestrian who trained and competed in Europe, Dammier, with a PhD in psychology, uses her expertise to write enriching horse adventures. She has written a number of other fiction and nonfiction books.

Whether you’re a curious elementary school student or an equestrian enthusiast there are many interesting topics to pursue. Patti Dammier has been an educator of horses and riders for over thirty-five years. Her experience both in the United States and Europe provides a broad equestrian perspective. During twenty-three-years overseas, while teaching elementary school, she studied equestrian disciplines in Spain, Germany, Portugal, and England. Many of the story situations described her books are based on her true-life experiences.

Besides being involved with horse training, Patti is a consummate researcher and involved with many aspects of writing research reports including aviation human factors to equine science. It’s with this perspective that she looks at her fiction writing with a researcher’s perspective. Although the story depictions are fictionalized, the research behind them is grounded in science.