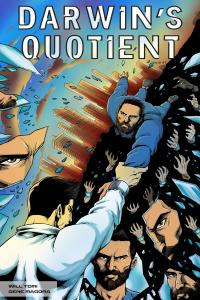 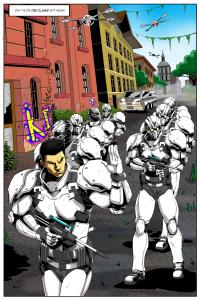 QUEENS, NEW YORK, USA, July 11, 2022 /EINPresswire.com/ -- Written by actor and award-winning filmmaker Will Tomi, a new graphic novel series entitled “Darwin's Quotient” comes to Kickstarter. With a generous nod to tech, the sci-fi comic book creates a world where humans are ranked based on their genetic potential and productivity. Tomi ups the ante by toying with the idea of evolving gene pools. How so? His story mixes tech with accountability via a trackable wristband every person wears to track good and bad behavior. Using big data, it does wonderful things like virtually stopping crime before it happens and putting a lid on debt, disease, and angst. Stepping outside the box makes one wonder, “Are we closer than we think?”

The comic book series unfolds significant themes of morality vs. humanity and nature vs. nurture. In the first of four Darwin's Quotient issues, Ben, a highly-ranked person, wears a wristband like everyone else. The device records his genetics as a base score, and his actions create a ranking similar to a test score he can pass on to his children. After a tragic accident, he finds everything has a cost - especially altered genetics.

To support the project, visit https://www.kickstarter.com/projects/willtomi/darwins-quotient-issue-1.

About Will Tomi Inc.:
Will Tomi Inc. was founded by Will Tomi, an award-winning filmmaker, writer, SAG actor, and martial artist.