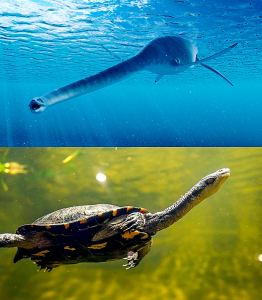 A long-necked plesiosaur compared to the modern snake-neck turtle 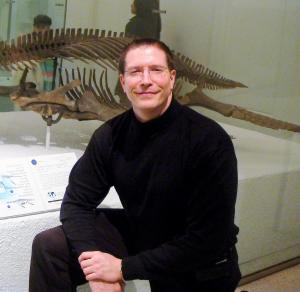 Vocational paleontologist Max Hawthorne’s study of Australian long-neck turtles shows the world his theory on why plesiosaurs had such long necks is spot-on.

To steal ideas from one person is plagiarism; to steal from many is research.”
— Wilson Mizner
BUCKINGHAM, PA, US, July 10, 2022 /EINPresswire.com/ -- Max Hawthorne, author of the award-winning Kronos Rising novel series and an independent paleontologist, has done a study of snake-neck turtles to prove that his 2016 theory on why plesiosaurs had such long necks is no "stretch of the imagination". “Plesiosaurs, and elasmosaurs in particular, have always stirred the public’s imagination,” Hawthorne said during a recent interview. “It’s the whole Loch Ness Monster/Nessie thing. For over a century people have wondered why they had these ridiculously necks that sometimes stretched over twenty feet in length. Was there some evolutionary advantage, did having such lengthy necks leave them vulnerable to predators, and did having the physique of a swimming giraffe make them slow and clumsy?”

“There have been many theories put out to justify plesiosaur necks, ranging from the feasible to the bizarre,” Hawthorne pointed out. “People once thought they sat on rocks near the water and used their necks like fishing rods. Some postulated that they inserted their fragile necks into dangerous holes in the seabed to search for food. I’ve even seen one ambitious theory that suggested that they had organs in their necks like electric eels and used them to shock fish.”

“In reality, it’s almost certain that we’re dealing with an Occam’s Razor type of situation, with the simplest explanation being the correct one. It’s a matter of form and function and, in my humble opinion, all those other theories are just plain wrong,” Hawthorne boldly stated. Known for his theory on plesiosaur locomotion, which many believe has solved the 150-million-year-old mystery as to how plesiosaurs swam using all four flippers, and which is on display in multiple museums, Hawthorne is no stranger to swimming against the tide. “We know that plesiosaurs’ necks had limited ranges of motion and weren’t flexible enough to be inserted into tunnels. We also know they didn’t sit on rocks. And, lastly, we know from their teeth that almost all of them were piscivores – they ate fish. But their small heads and needle-like fangs prevented them from tearing apart large prey. They were limited to feeding on fish the size of their heads or smaller.”

“What most paleontologists haven’t focused on is the plesiosaur’s prey. Fish have a lateral line - a series of sense organs running along their bodies that detects movement and vibrations in the surrounding water. It keeps them from bumping into one another and helps them find prey and avoid predators, even in darkness. As a result, fish can sense the displacement wave caused by approaching objects, including plesiosaurs.”

“Small items, like other fish, would not frighten other members of a school. But a large animal like a shark, approaching from the rear, would set off alarms, causing the school to scatter or take evasive action.” Hawthorne, concluded, “This is how the elongated necks of plesiosaurs were advantageous. They could follow a school of fish along, keeping pace with them, and ‘graze’ like a meat-eating cow. They would clamp down on one of the slower, weaker fish at the rear of the school, drop back a few feet to gulp it down, and then repeat the scenario over and over.”

To prove his theory, Hawthorne referenced certain turtles. “Snake-neck turtles are the closest extant animals to plesiosaurs when it comes to long necks. They’re aquatic and they’re fish-eaters, too. By studying them, we were able to prove my theory. We saw that when a turtle extended its snaky neck and approached fish around the same size as its head from behind, the fish sat idly by and were seized. But when it came right at them or tried sneaking up on tiny fish, wherein the turtle’s head was substantially larger than the prospective prey, the fish consistently detected their approach and fled. This proves that defeating the lateral line by approaching from the rear with a small head at the end of a long neck was an evolutionary advantage for plesiosaurs, and thus the reason for all those cervical vertebrae.”

“If you think about it, it makes perfect sense,” Hawthorne pointed out. “The largest of long-necked plesiosaurs, like the 40+ foot Elasmosaurus, also had the longest of necks, with 72 vertebrae. Their huge size created the most significant displacement waves, and thus required them to be further away from their prey in order to escape detection.”