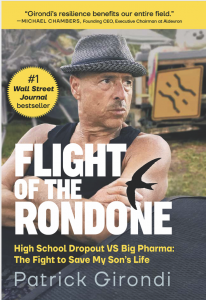 LOS ANGELES, CA, UNITED STATES, July 21, 2022 /EINPresswire.com/ -- Patrick Girondi’s book Flight of the Rondone was featured as a #1 Wall Street Journal Bestseller List the first week of July 2022 in addition to reaching #1 on three Amazon bestseller lists; #1 on Barnes and Noble; and top 100 on USA Today.

Watch a one-minute trailer for Flight of the Rondone here: https://youtu.be/e_47ho6-3Ts

The book gives critical insight into navigating the health system in the USA and Europe. Girondi describes devoting the past thirty years to curing the world’s two most common hereditary hematologic diseases, Sickle Cell Disease and Thalassemia. He began this mission after his oldest son was diagnosed with Thalassemia, a rare blood disease.

Girondi’s company delivered the world’s first commercial batch of gene therapy vector for Sickle Cell Disease and Thalassemia in 2010 only to be sabotaged by Bluebird Bio and Third Rock Ventures. The story is a nail-biter filled with interesting facts which culminate into a raw-knuckled court case in which 10’s of millions of dollars in attorney fees are consumed.

The story focuses on the pillaging and insider trading done by executives of Third Rock Ventures and Bluebird Bio resulting in shareholders losing billions of dollars. The tale of Girondi’s youth pivots to the Chicago exchanges where Girondi becomes an ‘Oprah’ guest as a rags to riches story. After his son is diagnosed, Girondi dives head first into the deep ocean of medical research and disgustingly dishonest, pharma bros. The book climaxes with the once high-flying angel of the Biotech world as its stock price sank from $235 to $5 dollars a share.

Real court documents prove that Bluebird Bio executives knew that they had a faulty, unsafe product, yet sabotaged the superior Memorial Sloan Kettering gene therapy vector (licensed by Girondi and San Rocco Therapeutics) and shelved it.

San Rocco Therapeutics, the company Girondi founded in 1993, hopes to begin clinical trials with the improved vector in 2023.

‘Flight of the Rondone,’ is available on Amazon, Barnes and Noble, Target, Barbara’s Books and other online sites and book stores.