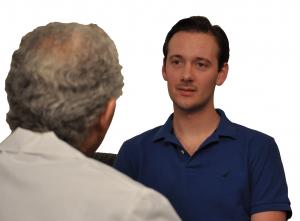 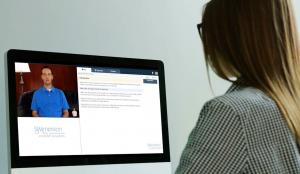 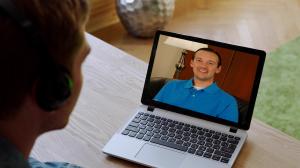 SIMmersion developed a virtual cocaine-addicted client, so clinicians can practice and build Motivational Interviewing skills to better support their clients.

According to the National Institutes of Health (NIH), 10% of the U.S. population have a substance use disorder at some point in their lives. Seventy-five percent do not receive any form of treatment. Motivational Interviewing (MI) is one of the key tools used for this treatment. It’s a methodology designed to help the client find their own reasons to stop using drugs. However, developing the skill to use this tool requires extensive practice.

Learning to Use MI.

As clinicians learn to use MI in their practice, mistakes will be made. SIMmersion, with the support of the National Institute on Drug Abuse (NIDA), has developed a virtual client named Jack Grant, who is addicted to cocaine. Jack’s behavior varies but is always typical of clients often seen by clinicians. One difference between counseling real clients and Jack is that with each exchange with him, clinicians get feedback helping them to properly apply the MI principles while providing them insights into Jack’s thoughts. Mistakes made with this fictional person do no harm but do produce feedback that helps clinicians learn and sharpen their skills.

A simulated clinical session with Jack was designed to replicate a real encounter. Jack starts every session showing his ambivalence and claiming that he can quit using whenever he wants. As the conversation starts, the clinician should ask Jack what he likes about using cocaine, even though that may seem counterintuitive. As rapport is being built, the clinician will seem to take a neutral position on Jack’s use. Jack will respond by talking about all the reasons why he wants to continue using, but with the proper application of the MI tools, Jack will also begin to talk about all of the downsides of using. He will begin comparing the things he likes about using and the problems it’s causing him. As it is in the real world, with the proper application of MI, Jack will not always decide he wants to stop using, but if he does want to stop, the clinician will practice providing additional support.

The Simulation Technology Behind Jack

Jack was created using the PeopleSim® technology, a SIMmersion proprietary technology used for a variety of applications. The role-players remember what you said, have emotions, and a randomly selected personality. For this application, each user statement has typically 5 to 20 responses that Jack can use. To select the response, Jack calculates a probability for each response, based on one of his randomly selected personalities, his memory of the history of the conversation, and the relationship the user has developed with him. He starts each session with ambivalence about using, and a tentative relationship with the user. Everything the user says is rated according to the impact it has on the relationship and his ambivalence, thus as the user talks more with him, the relationship will evolve.

A successful session will require 40 to 60 exchanges and about the same time as a session with a real client. There are over 2,200 ways that Jack can respond, so in any one practice, less than 3% of the responses will be seen. During practice sessions, nearly all of Jack’s responses will be different than in other sessions, providing a new experience and helping clinicians build lasting MI skills.

In the past, clinicians learned to apply MI by reading, going to workshops, participating in or watching a limited number of role-plays, and practicing with their real patients. While this helped them learn, there is not enough realistic practice time or supportive feedback to develop long-lasting skills. Now, with an online virtual role-player, clinicians can practice applying MI to both build skills and refresh previously built ones without potentially making dangerous mistakes.

SIMmersion’s mission is to train communication skills faster and more effectively by combining the world’s most realistic simulation experiences with interactive training content and extensive feedback. For more information contact SIMmersion by calling 443 283 2555 or online at www.simmersion.com/contact.