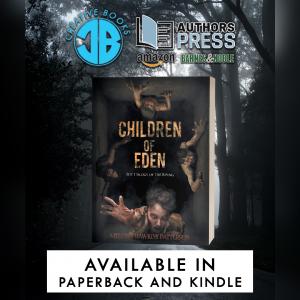 I gazed out the window, and the moon glowed in the night. I could hear my father whistling and rattling his keys, and I also could hear the calling of the undead.”
— Excerpt from Children of Eden

LOS ANGELES, CALIFORNIA, UNITED STATES, July 11, 2022 /EINPresswire.com/ -- Author Melvina Hawkins Patterson was one of the featured authors at the 2022 Los Angeles Times Festival of Books with her published book entitled Children of Eden: The Trilogy of the Rising. This book features the classic experiment-gone-wrong trope when an intelligent scientist develops a formula, hoping to rid the world of deadly cancers and things go horribly wrong. The formula was named Serum 222. The formula, named Serum 222, fell into the hands of a demented scientist who used the serum to raise the dead! Now, the world is infested with the walking dead, and a messy society rules everything. Humanity is tasked with the intense challenge of surviving as they navigate through an unfamiliar, cutthroat world.

Termination Project X is a movement put in place for the extermination of the undead. Hunters set out to cut the undead down by numbers, preventing any more humans from coming in contact with the infected. Will Termination Project X be successful or will humanity be forced into extinction? Find out more with this enthralling Sci-Fi novel!

Melvina Hawkins Patterson was born in Pittsburgh, Pennsylvania. She was raised in a large family of eight siblings. Her mother, Kathy Grant, inspired her to become the author she is today.

Children of Eden: The Trilogy of the Rising
Written by: Melvina Hawkins Patterson
Kindle |
Paperback |

Book copies are available at Amazon, Barnes & Noble, and other online book resellers.