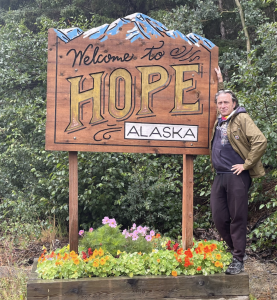 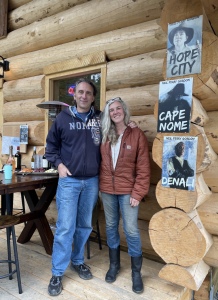 HOPE , ALASKA, USA, July 30, 2022 /EINPresswire.com/ -- In 2019, Neil Perry Gordon visited Hope, Alaska, a small town hugging Turnagain Arm on the Kenai Peninsula. This was not the novelists first time to this former gold mining site, but was to become a significant one.

It was during a two-week vacation, visiting close friends when inspiration created a story. The tale was told by Jeannine Jabaay, owner of the fabulous Hope City restaurant—The Dirty Skillet. During their conversation over delicious wine and great food, Jeannine shared the history of Hope and how it got its name.

What she knew for sure:
"Even before the Yukon, Hope is the original place that gold was discovered in the north. More than 8,000 folks came to Hope with the dream of finding their fortune in the Six Mile and Resurrection Creeks. Hotels, social halls, banks, restaurants and brothels quickly dotted the small community, with new arrivals coming daily by boat, foot and wagon. But there was no town name. Some township leaders decided that the place would be named after next person off the boat. When Percy Hope stepped foot off the boat, he had no idea that he was about to leave his legacy. Hope, Alaska is named after a young man who wanted to stake his fortune in Alaska. Little else is known about Percy Hope. His name seems to practically disappear from the history books.”

What she wasn't sure of, but shared as fact anyways:
"After landing in town, Percy Hope tried his luck for many months in the waters of the Resurrection Creek and Six Mile Creek. Although he managed to pan a few gold flakes, he never did strike it rich. He did, however, gather enough gold to purchase an old dirty skillet. With that skillet, Percy Hope made his name by providing hearty, heaping, home-style cooked foods for the other prospectors and their families. Percy Hope's legacy lives on here at Dirty Skillet.”

Before Jeannine could finish, an idea for a novel was born and less than a year later, Hope City - The Alaskan Adventures of Percy Hope was published. Curious to know more of Percy’s fabulous adventures, Neil wrote Cape Nome as its sequel, and just this year he completed the story of this young man’s journey by publishing Denali, the final book in the Goldfield Trilogy.

With three books in hand, Neil Perry Gordon returned to Hope, the source of his inspiration, to promote the trilogy with a book signing at the Dirty Skillet. Attending the signing was the book cover artist for all three novels—Erica Miller. Erica’s artwork provided just the right tone, offering readers a glimpse to the story within the Goldfield Trilogy.