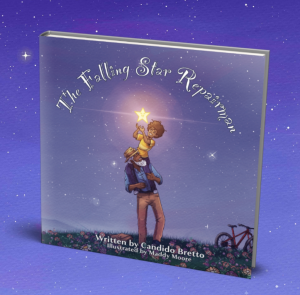 In The Falling Star Repairman, young Marcus learns he has a special talent and is mentored by the last falling-star repairman in the galaxy.

Creating this book was a total joy! ”
— Candido Bretto

PLYMOUTH, MASSACHUSETTS, UNITED STATES, July 26, 2022 /EINPresswire.com/ -- Briley & Baxter Publications is thrilled to announce the release of the children’s book, The Falling Star Repairman, by author Candido Bretto, with illustrations by Maddy Moore, available on August 9, 2022, at Amazon, Barnes & Noble and other online retailers.

As children look up into the night sky, their imaginations are illuminated by the millions of stars they see and cannot see. And thanks to young Marcus, the night sky is as bright as ever.

In The Falling Star Repairman, Marcus discovers he has special talents, even as a young boy, mentored by Elmer, the last falling-star repairman in the galaxy, Marcus uses his gifts to save all of humanity – they keep the night sky filled with starlight.

Their special friendship celebrates the power of connection, special gifts and caring for others. This beautifully illustrated book allows readers of all ages to consider the possibility they themselves may possess a hidden power that has yet to be discovered. Who knows, they might save the world someday.

“Creating this book was a total joy! The inspiration behind Elmer’s character is Elmer Mendes of Duxbury, MA,” said Bretto. “In my youth, I recall seeing Elmer perched on his bike at the First Congregational Church in Marshfield center, waving at folks and ringing his bell as they passed by.”

About the Author:
Candido Bretto is an African American/Cape Verdean American music producer, songwriter and musician. He grew up in the seaside town of Marshfield, MA in a musical family. After graduating high school, Bretto earned a Certificate of Study from Berklee College of Music in Boston, MA. In 2019, Bretto released the album Rockin’ The Secrets of Plymouth Rock, featuring 28 students from six Plymouth, MA public elementary schools. He enjoyed teaching toddler through sixth-grade music at Bay Farm Montessori Academy (BFMA) in Duxbury, MA. BFMA students enjoyed participating in drama, and Bretto enjoyed teaching them the songs they sang on stage in musicals. Earlier in his career, he landed a rewarding job at Woodward School for Girls in Quincy, MA, teaching music to grades six through twelve. It was there he saw the awesome power of music theory positively affect the lives of adolescents.