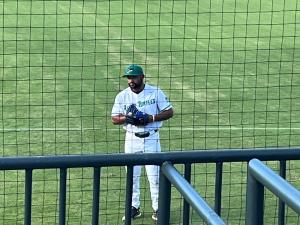 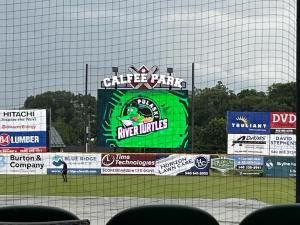 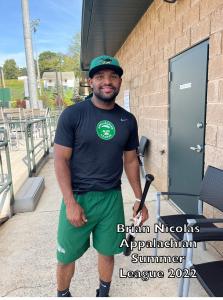 AT THE BALL PARK CARLFEE

LANGHORNE, PA, UNITED STATES, August 3, 2021 / Collegiate Baseball Player Brian Nicolas who is from Langhorne PA and who played in the MEAC Collegiate Baseball League during the 2022 Spring season has made a big impact in the 2022 Appalachian collegiate summer baseball league. Nicolas was the 1st Team All-MEAC at third base… MEAC Tournament Most Outstanding Player… MEAC All-Tournament Team… 1x MEAC Player of the Week (3/21). Nicolas will be a rising senior for the 2023 year playing Division 1 baseball for Coppin State University under the baseball director of Coach Sherman Reed

Nicolas has made a big impact in the Major League Baseball and USA Baseball Appalachian Collegiate league this 2022 summer. BRIAN NICOLAS WHO IS PLAYING AT CALFEE PARK, VIRGINIA SUMMER 2022 FOR THE PULASKI TURTLE under the direction of Clark Christ who is the current team manager is playing second base. Brian Nicolas goes 5-for-6, 2 3B, 5 RBI, R, BB ON 8/1/22 with a hitting average of 409. Brian Nicolas had 5 hits & drove in 5 in against the Bluefield Ridge Runners in a doubleheader split on 8/1/22. Nicolas joined THE PULASKI TURTLE in late July of 2022.

The Appalachian League is a collegiate summer baseball league that operates in the Appalachian regions of Tennessee, Virginia, West Virginia, and North Carolina. Designed for rising freshmen and sophomores using wood bats, its season runs from June to August. The summer league is organized by Major League Baseball and USA Baseball.

Major League Baseball and USA Baseball are currently working jointly in a format which allows the Appalachian League to feature the nation’s top rising college freshmen and sophomores in wood-bat play each summer. The new format affirms MLB’s commitment to the region, maintains the existing branding of the league, and assures that the Appalachian League will continue to host high-caliber baseball and future Major Leaguers for years to come.

The Appalachian League is a part of the Prospect Development Pipeline (“PDP”), the collaborative effort between MLB and USA Baseball to help establish a player development pathway for amateur baseball players in the United States. In addition, the summer collegiate league will be an integral part of the identification and development process for the USA Baseball Collegiate National Team and other future national teams.