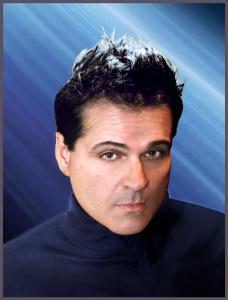 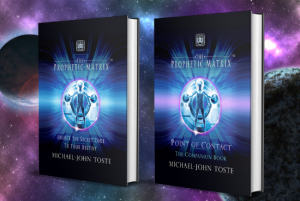 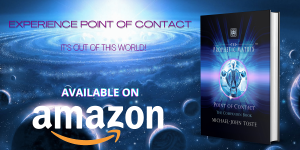 SILICON VALLEY , CA, USA, August 4, 2022 /EINPresswire.com/ -- Lighting has struck twice, with Michael-John Toste being the first author to officially send 2 of his books into outer space for their interstellar premier prior to their official release on earth! Now the futurist, rock star and International Destiny Coach is making space history in the publishing industry a second time.

On June 7, 2022, The Prophetic Matrix: Point of Contact -The Companion Book was transmitted from earth into outer space, and within 45 days, the eBook journeyed over 700 billion miles deep into space, making literary history!

SpaceSpeak.com currently has 13 operational transmitters located around the world (Portugal, UK, Australia, Brazil, US). Point of Contact was implemented into their 24-hour repeat transmission mode resending Michael-John’s latest nonfiction title from each transmitter 200 times (i.e., every 5 minutes). Point of Contact is currently being sent to an estimated 5000 planetary star systems within 161 light years (plus thousands of other stars that may also have planets), including Proxima Centauri. In 4.25 years, Point of Contact will pass the nearest stars. In a billion years, the digital book will still be traveling and have passed through hundreds of galaxies.

Point of Contact, The Companion Book to The Prophetic Matrix: Unlock The Secret Code To Your Destiny, presents a fresh approach to navigating into one’s future with far less turbulence along the way. During these unprecedented times, who wouldn’t welcome an innovative perspective that can assist you in making the right decisions for more outstanding results in life? This book shares a brilliant method for identifying the distracting voices that operate in the conscious and subconscious mind. These disturbing thoughts often speak to us in ways that confuse our decision-making process. They can trigger the mind to malfunction in its attempt to discover the right path to the individual’s destiny.

Michael-John Toste is an international recording artist, author, futurist, and destiny coach. He was previously the lead vocalist of the concept rock group, the All Sports Band, who achieved chart success throughout the 1980s, including two Billboard Hot 100 hits in the US and a top 20 hit in Germany. With appearances on MTV, Solid Gold, Nickelodeon, and American Bandstand, the All Sports Band was voted the third most popular group in America. Michael-John Toste’s upcoming album Phenomenon features Grammy award winners Deniece Williams, Bobby Kimball of Toto, and Larry Dunn of Earth, Wind, and Fire. Michael-John hosts a weekly, hour-long radio program called Your Day of Destiny.

For more information on Michael-John Toste and his upcoming work, visit:
https://linktr.ee/ThePropheticMatrix