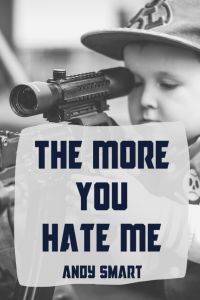 Unsolicited Press, a PNW small press, releases Native Missourian's first memoir about the death of his father and surviving the loss of a parent to suicide.

ST. LOUIS, MISSOURI, USA, August 1, 2022 /EINPresswire.com/ -- THE MORE YOU HATE ME by Andy Smart is a memoir-in-essays collection that examines the author’s experience with his father’s suicide and the layered influence of the film Full Metal Jacket on both men. As Smart navigates the worlds of his past, present, and future, Kubrick's Vietnam war movie casts its long shadow over him; his is a story of what it means to live each day as a sequel to the last. This isn’t just a suicide memoir or a survivor’s victory lap, but a book about the hardest truths of being a son.

PRAISE FOR ANDY SMART
“Family violence is the subject of many memoirs but I’ve not seen a book examine the nuance and indeterminacy of gun culture as it slips between the walls of the house next door. Smart’s narrative unfolds against the back drops of Hollywood and the NRA—America’s twin churches—where death is advertised in bright colors. At home the darkness streams down. This is a must read. I’ll wager you can’t put it down.”

—Stephen Kuusisto author of "Planet of the Blind"

ABOUT ANDY SMART
Andy Smart earned his MFA in Creative Nonfiction from the Solstice Creative Writing Program at Lasell University, where he was a Michael Steinberg Fellow. Andy’s essays have appeared in "Salamander," "Sleet Magazine," and "Moon City Review" as well the anthologies "Show Me All Your Scars" (In Fact Books) and "Come Shining: Essays and Poems on Writing in a Dark Time" (Kelson Books). His poetry has appeared in "Lily Poetry Review," "The American Journal of Poetry," and elsewhere. Andy was a 2019 Pushcart Prize nominee. His first chapbook of hybrid poetry, "Blue Horse Suite," is available from Kattywompus Press. THE MORE YOU HATE ME is his first full-length book. Andy lives in Missouri and online at www.AndySmartWrites.com.

ABOUT UNSOLICITED PRESS
Unsolicited Press was founded in 2012 and is based in Portland, OR. The press strives to produce exceptional works of fiction, nonfiction, and poetry from award-winning authors. Learn more at www.unsolicitedpress.com. The publisher can be followed on Instagram and Twitter: @unsolicitedp

THE MORE YOU HATE ME is available on August 16, 2022 as a paperback (244 p.; 978-1-956692-27-3) and e-book (all major retailers). The title is distributed to the trade by Ingram. The author is open to speaking with the media, holding readings, and engaging in other author opportunities.