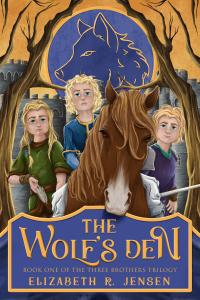 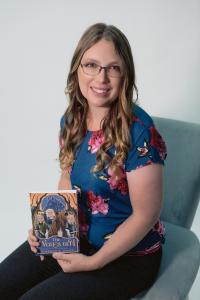 The book, geared for readers ages 9 to 12, is a perfect addition for fans of John Flanagan’s The Ruins of Gorlan, Andrew Peterson’s On the Edge of the Dark Sea of Darkness, and Pedro Urvi’s The Traitor’s Son. It delves into key themes like war casualties and the mental effects of battle, and also helps teach the value of teamwork, friendship, and unyielding loyalty.

THE WOLF’S DEN has been named a Finalist in Children’s Fiction by International Book Awards, a prestigious recognition for self-published and indie authors sponsored by American Book Fest.

The story revolves around three brothers...three destinies...three chances to fail. And one country hangs in the balance.

Peacetime in Etria is no time to become a knight. War lies in the past and the future is for growing new things. Swords become plows and soldiers become farmers, artists, shop owners, and poets. Everyone knows that training for a war that may never come is a waste of time, but for the three grandsons of the greatest war hero in history, knighthood isn’t a choice -- it’s destiny.

The three inseparable boys set off on three very different roads to knighthood. The eldest travels the straight path. The middle boy follows the crooked way of the rebel. The youngest follows the trail of legend.

When war returns all too soon, the boys will be tested. They will hold in their hands the lives of the most powerful and important people of all of Etria. If they fail, their country may fall into darkness and horror.

But these boys were born to be knights, to protect their king, land, and people no matter the cost to themselves. In the end, they will give their all, but will it be enough?

Says a Middle School teacher in Kansas, “I love tales filled with magic, knights, and kingdoms in peril. This book checks all the boxes and then some, and I know it will be one of those books I go back to again and again for fun and comfort.”

The mother of a third grader in Georgia writes, "My third grader only reads graphic novels, but he couldn't put The Wolf's Den down, and it has no pictures!"

THE WOLF’S DEN is available on Barnes & Noble and other popular retailers where books are sold.

ABOUT THE AUTHOR
Elizabeth R. Jensen is an Arabian horse breeder in Atlanta, GA. Elizabeth has a bachelor’s degree in animal science, a master’s of business administration, and a master’s of organizational leadership. In elementary school, Elizabeth was introduced to creative writing in an after-school poetry class for gifted students. Since then, she has continued to write poetry. The Wolf’s Den is her debut novel. Visit www.gryphon-publishing.com.