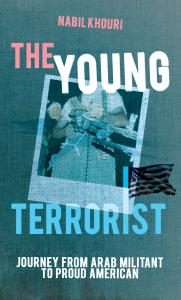 BOULDER, COLORADO, UNITED STATES, August 4, 2022 /EINPresswire.com/ -- The release today of Nabil Khouri’s memoir THE YOUNG TERRORIST is a personal reminder of why many people in democratic nations applaud the elimination of someone like al Qaeda leader Ayman al-Zawahiri. According to Khouri, “The threat from terrorists such as al-Zawahiri to civilian populations is real and imminent. We have a moral duty to stop them.”

The book is a gripping memoir: Nabil Khouri’s journey from Arab militant to proud American.

As a young boy growing up in Jordan in the 1960s, there were only two things he believed in--the power of his automatic rifle and the certainty that Western culture was evil. THE YOUNG TERRORIST recounts his transformation from a proud member of a Palestinian militia group to an even prouder American citizen.

Nabil spent much of his youth in Jordan. He experienced the 1967 Arab-Israeli war, as well as civil wars in Jordan (a conflict known as Black September) and Lebanon in the 1970s. At the age of eleven, he joined the Arabic Liberation Front (ALF) not out of any great allegiance to the Palestinian cause but for a child’s reason: It would convince the Jordanian Muslim boys to stop bullying him for being a Lebanese Christian.

This memoir describes what followed: his experiences confronting death and violence as a preteen terror group member, the first tastes of Western culture as a teen in Spain, an unexpected return to the Middle East during Lebanon’s civil war, and his escape to America. Becoming immersed in the group’s radical militia ideology warped Nabil’s sense of identity and tore at the fabric of his family. However, he ultimately appreciated the opportunities and freedoms of life and education in the United States, unlocking his own “American dream.”

About the Author
Nabil Khouri built a successful career in engineering after emigrating to the United States at the age of 19. After marrying his American-born wife, Mary, they settled in the Southern United States. Nabil Khouri does a variety of volunteer work within his community that includes advancing interest in, and knowledge of, Middle Eastern culture. He loves traveling internationally with his wife.

About Armin Lear Press
Armin Lear was founded with the purpose of publishing books connecting people with ideas that make our lives richer, more fulfilling, and happier. Its founders have 29 years of publishing experience. The company headquarters is near Boulder, CO with a production office in Arlington, VA and a design team near Boston, MA. Armin Lear is a member of the Independent Book Publishers Association and distributes its books worldwide in English through Ingram.