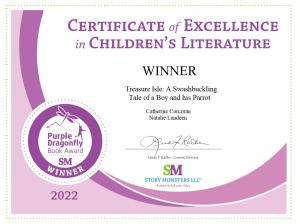 AUSTIN, TX, USA, August 1, 2022 /EINPresswire.com/ -- Treasure Isle: A Swashbuckling Tale of a Boy and his Parrot, an award-winning children’s picture book written by Catherine Corcoran and illustrated by Natalie Lundeen, has won the Purple Dragonfly children’s book award for 2022.

The annual award celebrates the best of children’s literature, recognizing stories and illustrations that are original, innovative and creative. It has been operating since 2009 with winners announced each July.

Treasure Isle tells the story of a boy and his parrot who set sail in search of pirates’ treasure and find themselves on an unexpected adventure. With clever rhyming and charming illustrations, the story follows the main characters’ journey as their compass guides them north, south and west.

In April 2022, Treasure Isle was awarded Gold in the Wishing Shelf book award, judged by 150 school children across the United Kingdom.

Treasure Isle: A Swashbuckling Tale of a Boy and his Parrot is published by Land Ahoy Press and is available at https://treasureislebook.com, on Amazon and everywhere good books are sold.

About the Purple Dragonfly Book Award

The Purple Dragonfly Book Award is a worldwide book competition that began in 2009 to celebrate the best in children’s books. We are looking for stories that are original, innovative, and creative in content and design. We want to recognize and honor accomplished authors and also highlight up-and-coming, newly published, and younger writers in the field of children’s literature.

Treasure Isle is a children’s picture book written by Catherine Corcoran and illustrated by Portland-based artist, Natalie Lundeen. The story incorporates the comforting repetition common to children’s stories as it tells the tale of an unexpected adventure. The book is the recipient of a Gold Wishing Shelf Book Award and a Purple Dragonfly Award. Treasure Isle received five star reviews from Reedsy Discovery and Readers’ Favorite and is described as “an entertaining bedtime story with swashbuckling fun and delightful images” by prestigious literary critic Kirkus Reviews. To find out more, visit https://treasureislebook.com