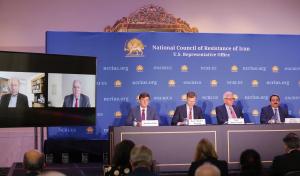 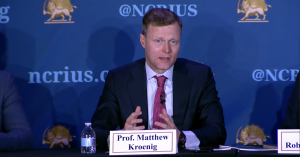 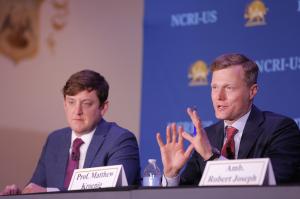 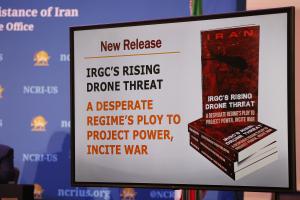 It is really amazing the info NCRI has been able to provide on the regime’s activities, going back to very foundational revelations on the nuclear program 20 years ago, all the way to this report.”
— Professor Matthew Kroenig, The Atlantic Council

Professor Mathew Kroenig remarks are below:

Thank you very much, Alireza, for the invitation to be here today. Thanks to all of you for attending this discussion on this important issue. Thanks to my distinguished co-panelists.

I have been focused on the Iranian nuclear challenge, in and out of government over the past 20 years. And I’ll get to that in a moment, but I did want to begin also by congratulating NCRI on this report [IRGC’s Rising Drone Threat; A desperate regime’s ploy to project power, incite war]. It’s really amazing, I think, over the past 20 years the kind of information NCRI has been able to provide on the Iranian regime’s activities, going back to some very foundational revelations on the nuclear program almost 20 years ago, and all the way to this report today. And if you haven’t read it yet, I would recommend that you do. It’s really remarkable the level of detail they get into in terms of Iranian drone production capability.

And this is a real threat currently in the region. These drones have been used to kill Americans in Iraq, to attack Saudi oil facilities. Iran is using this drone proliferation to further their goals in the region by destabilizing the region. And I think understanding this threat is important. So, congratulations.

Also before I turn to the nuclear threat, I also wanted to come to this idea of the Biden doctrine that some of my colleagues have referenced. Whenever there’s a new president, people ask, what is the president’s foreign policy doctrine? And it seems that the emerging Biden doctrine is this idea that we’re at an inflection point between democracy and autocracy and we need to rally the democracies, like at the Summit for Democracy last week, to take on these revisionist autocracies that are challenging the United States and its allies, challenging the rules-based international system. And it seems like a lot of the focus though is on China primarily and then to a lesser degree Russia. But I think as we think about this global competition between democracies and autocracies, we should also consider the Iranian regime as part of this. Just like China challenges us in the Indo-Pacific but globally, Russia is challenging the United States and its democratic partners in Europe, Iran is doing the same thing in the Middle East. And increasingly, Russia, China and Iran are working together: arms sales, military exercises. And so sometimes I think people think of Iran as a regional issue, but I think it is really a part of this global competition between democracy and autocracy.

And in fact last year, a lot of my background is in nuclear issues, but last year I published a book called The Return of Great Power Rivalry: Democracy vs Autocracy from the Ancient World to the U.S. and China. And I think there is a lot of pessimism in some Western capitals, that our democracies are polarized and dysfunctional. Maybe the autocracies have the upper hand. They have firm leadership, they can plan for the long-term, they can impose decisions on their system. Meanwhile we’re fractious and polarized. But my book came to a different conclusion, that actually democracies have real advantages in these competitions, autocracies have real weaknesses. And I think this is true in Russia and China but certainly if you look at the Iranian regime.

There’s a lot of focus on the sanctions but the real cause I would say of the struggling of the Iranian economy is the regime’s mismanagement of the economy. Diplomatically, the aggressive foreign policy of this region I think has led much of the rest of the world to counterbalance against it. And then it has the same military and security challenge that all dictatorships do, which is that it fears its own people more than it fears external enemies. And if you look at the behavior of the Iranian regime, it spends an awful lot of resources and attention on repressing and abusing the Iranian people.

So, it should be apparent in what I said already, that this isn’t a conflict between the United States and Iran, it’s really a conflict between the current regime in Iran and really much of the rest of the world that wants to have a functioning rules-based international system, but countries like Russia, China, and Iran are challenging that.

And so people have focused on this breakout time: how long would it take the Supreme Leader to dash to one bomb’s worth of weapons-grade uranium? And right now, outside experts are estimating that this breakout time has shrunk down to as little as three weeks. So if the Supreme Leader made the decision today to enrich as much uranium as fast as possible, that he could be essentially to the point of no return within three weeks. This is really I think the worst position we’ve ever been in, including worse than in 2012, in the runup to the last deal.

Why do we care about a nuclear-armed Iran? It poses a number of obvious threats. It could lead to further proliferation of nuclear weapons in the region and to terrorist groups. If Iran is backstopped by nuclear weapons and a nuclear threat, I think the regime would engage in more aggressive course of diplomacy and support to terrorism in the region and around the world. And there would be a risk of nuclear war. I don’t want to exaggerate that, I don’t think it’s high. But the risk is not zero. There would be I think serious crisis between a nuclear-armed Iran and nuclear-armed Israel, nuclear-armed United States. And any one of those could spiral out of control. And once Iran has intercontinental range missiles, which is something that it’s working on, it could result in a nuclear attack on the U.S. homeland. So, this is a serious threat. I think some of our partners are correct to say this is an existential threat.

What to do about it? And I’ll wrap up there. Let me first address Alireza’s good question. Of course this nuclear program is not the result of the United States’ withdrawing from the JCPOA. This is something the Iranian’s have been working on for 20 years. They carefully negotiated the JCPOA so they could continue to advance their nuclear program, even with the deal in place. And then as Alireza correctly points out, they weren’t even living up to the strict terms of the deal even while the deal was in place. So, I think we need to keep our focus on the problem. The problem is the Iranian regime, not President Trump or his decision to withdraw from the agreement.

What do we do about it? I think an engagement and pressure track makes sense. I think it’s fine if the Biden administration and others want to try to talk to the regime. I think it makes sense to talk to your enemies. But we need to have a stronger pressure track. I think the regime needs to understand that it can’t muddle through and get to a nuclear weapon, that if it continues on the path that it’s on, there are going to be unacceptable consequences.

I think there are a number of ways we can dial up economic pressure, including secondary sanctions on Chinese purchases of Iranian oil. I think there are things we can do to make the regime worry more about its domestic insecurity issues, as David Shedd correctly pointed out, supporting the democratic aspirations of the Iranian people. And then I do think we need to put the military option back on the table as a last—well first to support diplomacy. I think that’s one thing that will concentrate the minds of many of the diplomats in Vienna, if they know that their efforts fail the result will be military strikes on Iran’s nuclear facilities. And then as a last resort to prevent Iran from building nuclear weapons if necessary.

So I think by following a strategy like that, we can keep Iran from building nuclear weapons. But I think the ultimate goal, as many of my colleagues have pointed out, is to one day have a better government in Iran that respects the human rights of its own people and that follows a more cooperative foreign policy internationally. I’ll end my remarks there and look forward to the discussion. Thank you.