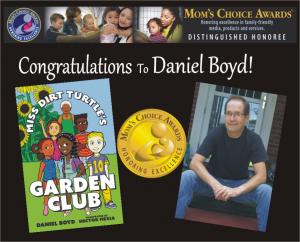 When the horrors of racial injustices last summer swamped the news, I was determined to get 'Miss Dirt Turtle' and its inclusive message out to my readers that the best way to fight hate is with love.”
— Danny Boyd, award-winning author, filmmaker, and playwright
CHARLESTON, WV, UNITED STATES, December 9, 2021 /EINPresswire.com/ -- Surviving adolescence is hard anywhere, especially in underprivileged neighborhoods like the one Danny Boyd has chosen to call home for decades in Charleston WV’s gritty West Side.

The award-winning author, filmmaker, and playwright Danny's new book, "Miss Dirt Turtle's Garden Club," tells the optimistic story of five friends in that West Side neighborhood who try to navigate its pitfalls in the most unexpected ways.

Winner of the GOLD Mom's Choice Award, the book was released Thanksgiving week 2021 by last year’s Independent Publisher of the Year, Headline Books.

The resilient kids are guided by Miss Dirt Turtle, an old lady in the neighborhood who gives them hope and purpose to find their way to a brighter future.

Featuring uniquely stylized illustrations by Hector Mexia authentically depicting a diverse cast of characters, and accompanied by a strong narrative, the book deftly conveys the kids' emotions and mental turmoil.

"Normally, in my 40-plus year of creating, I've had to reach for faraway places," says Boyd. "But for "Miss Dirt Turtle," I just had to look out/off my front porch. These are my kids and neighbors; in a neighborhood, I love, warts and all."

The power of compassion, community, and shared experience runs deep through the book - along with a surprising amount of genuine sentiment and inspiration.

Danny Boyd’s storytelling morphs the characters from wise-cracking kids to a caring and inspired group of go-getters. A much-needed book in today’s turbulent times, 'Miss Dirt Turtle's Garden Club' gives direction to lost and abandoned kids, steers them toward beauty and hope, and teaches them (and us) about the transforming power of kindness.

"I started working on the book just before the pandemic," says Boyd. "But when the horrors of racial injustices last summer swamped the news, I was determined to get 'Miss Dirt Turtle' and its inclusive message out to ensure my readers that the best way to fight hate is with love."

"We are happy and proud to work with Danny on his second book with Headline after "The Adventures of Wandala," a multi-award winner including "Mom's Choice" Gold award winner," says Cathy Teets, President of Headline Books.

‘Miss Dirt Turtle’s Garden Club’ has also been produced as a kids' stage musical with music and lyrics by West Virginia Music Hall of Famer and longtime host of NPR’s ‘Mountain Stage’ Larry Groce at the acclaimed Albans Arts Center in September 2021. This marked the second stage collaboration between Boyd and Groce after 'Paradise Park The Musical' premiered at Theater West Virginia in 2018. It is now being staged by The Charleston Light Opera Guild (Charleston, WV), to open January 28-30 and February 4-6. 2022.

‘Miss Dirt Turtle, The Musical’ is set to open at Theatre West Virginia at the Hulett C. Smith Theatre at Tamarack in Beckley, WV on May 19th.