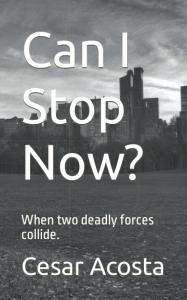 Can I Stop Now?: When two deadly forces collide 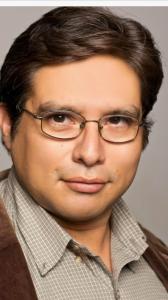 UNITED STATES, December 28, 2021 /EINPresswire.com/ -- Cesar Acosta explores what drives disturbed minds to take lives again and again with his dark novel following two serial killers with very different motivations. "Can I Stop Now?" immerses readers in the bloody paths they have carved throughout the country.

Acosta's thriller follows Mina Thorne and Lester Quartz. Thorne lost her older brother to an abusive father, whereas Quartz has a father who is similarly abusive, a crooked cop who attempts to cover up for his son when Lester goes on a bloody rampage throughout the country. The story follows the two serial killers with their different motivations. While the male is given to all his whims and desires, the female begins her journey fighting for her very life and struggling to survive. But now she begins killing random people as well and feels justified in doing so, believing herself to be an agent of justice. She is being consumed by that inhumane craving to extinguish life.

Acosta’s narrative contrasts the killers’ descent into brutality by providing the perspectives of the survivors as well, showing how they recover from the traumatic and violent experiences. He shows that it is possible to rise above even the most horrible circumstances, rather than let those moments dominate their lives and take them down nightmarish paths.

"It’s not just about the killers, but how the survivors pick their lives up. I mean in these past years alone, we have been at the mercy of evils within the society. It is up to us to find a way, not just to cope with all that has been done to our families, but to find a way to thrive. It is our duty to ourselves to pick our lives up, and not just survive but thrive and flourish, no matter what evils we’ve had to endure." Acosta says. With "Can I Stop Now?" fans of thriller and suspense novels such as the works of Thomas Harris will be in for a chilling reading experience that will keep them on the edge of their seats.

Will you shed a tear of blood?
While I Spill out all my hate and love,

Can I do this while you sail my home, Burn it down to the ground,
Telling me more and more, That my words are nothing to you.

Is all this for your honor, Your glory,
So that you know you're king

Well then, Why don't we start to kill each other?
Then you can rule your kingdom of ashes, Building bridges over rives of blood.


So come and take me
Make me fight your war, Torture, Kill me,
Hide my death from all so I can't be a martyr, though,
Lest it be for your cause.


About the Author
Cesar Acosta is a freelance writer pursuing a degree in Psychology to study criminal psychology and possibly enter the FBI's Behavioral Science Department. He is a fan of the psychological thriller genre, and is influenced by works such as Robert Bloch's "Psycho" and Thomas Harris' "Red Dragon."