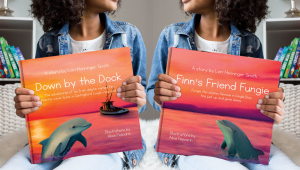 Down by the Dock and Finn's Friend Fungie Books 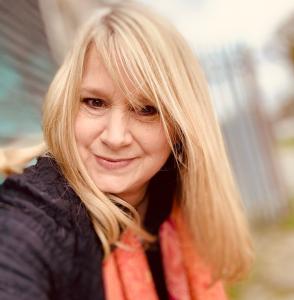 The Real Finn and Fungie

On the heels of the first anniversary of Fungie's disappearance, a heart-warming new way to remember him has arrived.

There are few dolphins that inspire such fond memories from those who encountered him more than Fungie, the dolphin of Dingle Bay. This lovely story, told from Finn's point of view, is very touching.”
— Liz Sandeman
DUNDALK, COUNTY LOUTH, IRELAND, December 22, 2021 /EINPresswire.com/ -- Lori Henninger Smith has released two new, interactive books which feature real-life Irish dolphins as the main characters, including one about Fungie, Ireland's favourite dolphin.

Henninger Smith said, "After witnessing the collective sadness Fungie's disappearance created not only in those in Ireland, but around the world, I wanted to find a fun, happier ending to his beautiful story that would leave everyone with a smile when remembering the famous dolphin." "So, I re-wrote his story's ending as an adventurous new beginning."

After Fungie went missing, imagine if he were spotted outside the Sydney Opera House! Imagining Fungie visiting famous locations around the world is the creative storyline of Lori Henninger Smith's new children's book, "Finn's Friend Fungie." She suggests perhaps Fungie just wanted to travel and expand his universe. This idea is a bit auto-biographical for Henninger Smith, an American who expanded her own universe by moving to Ireland in 2020 to go back to college at the age of 57, and found herself living on Carlingford Lough during the pandemic, when Finn also decided to take up residence in the beautiful setting of the Cooley Peninsula.

Henninger Smith's books caught the eye of Liz Sandeman, the co-founder of Marine Connection, a UK-based, dolphin and whale charity. Ms. Sandeman said, "There are few dolphins that inspire such fond memories from those who encountered him more than Fungie, the dolphin of Dingle Bay. This lovely story, told from Finn's point of view, is very touching." A portion of the proceeds will go to Marine Connection to further their efforts to end captivity.

The second book is about Finn, a bottlenose dolphin whom the town of Carlingford embraced as their own. During the pandemic in 2020, Finn was spotted favouring the ferry boat area in Greenore, inspiring his book title, "Down by the Dock."

Finn and Fungie are real-life dolphins who spark interest for further learning on wildlife and marine conservation. Henninger Smith and Marine Connection are planning an additional entity called Team Finn and Fungie - Help End Captivity. A unique program school kids around the world can join, emphasizing the need for the end of captivity of all whales and dolphins and therefore helping to ensure freedom for all cetaceans for generations to come.

Children can use "Scan and Listen" audio codes to hear the books read aloud, turning the page when they hear the dolphin squeak; narrated by Irish Indie Folksinger, Orla Travers, of the band Sillk. "Scan and Learn" codes are scattered throughout the books that when scanned with a smartphone camera, they provide more information about items on the page. A fun website has been created to accompany the books that offers more fun images and videos of these curious dolphins along with downloadable coloring sheets and more. The site also has resources for teachers to use the books in the classroom.

Readers are introduced to the real dolphins on the last pages of the books with images and more fun facts such as do you know where Fungie got his name? Or did you know he is in the Guinness Book of World Records? They will also meet key people in the lives of these dolphins- Jeannine Masset, who photographed Fungie in Dingle Bay for over twenty five years. And Damian Smith and John Kelly, divers in Carlingford who check up on Finn. There is also a nod to Paddy Ferriter, the lighthouse person credited with discovering Fungie in 1983.

Beautifully illustrated by Italian artist, Alice Pescarin, accurately depicting the areas in which these dolphins reside(d), Carlingford Lough and Dingle Bay. The books are presented by Silver Girl Sails Publishing, Ltd. and are distributed by Ingram Spark internationally.