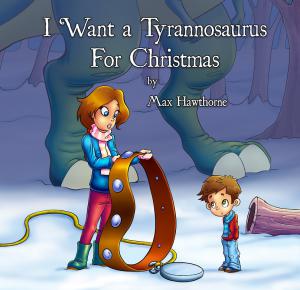 I Want a Tyrannosaurus for Christmas, by Max Hawthorne 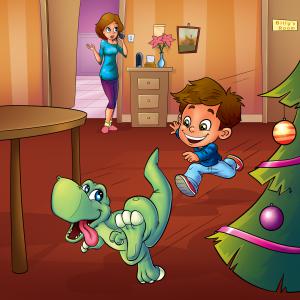 One of the cutest books to come on the market for children.This book is perfect to snuggle up and share with a child, as the beautiful illustrations really capture a child's attention. ”
— Dr. Melissa Caudle, bestselling author of "A Day at the Zoo"
NEW HOPE, PA, US, November 30, 2021 /EINPresswire.com/ -- With the ongoing success of such dinosaur driven franchises as the Jurassic Park and Jurassic World series (both books and films), it’s only natural for there to be like-minded children’s books for budding paleontologists.

Enter, I Want a Tyrannosaurus For Christmas (Far From The Tree Press, LLC), the endearing story of a young boy named Billy who ends up getting, of all things, a baby T-Rex in his stocking. The book is the brainchild of author Max Hawthorne, author of the award-winning Kronos Rising novels, a series of high-octane suspense thrillers a la the aforementioned Michael Crichton. that explore the ramifications of giant prehistoric marine reptiles vying with mankind for dominance over today’s oceans.

When asked about the challenges of going from crafting sci-fi/suspense thrillers for adults to writing a well thought out children’s book, Hawthorne said, “It wasn’t as tough as you might think. As a writer who pens books about giant dinosaurs, I’m basically a big kid at heart, so channeling my inner child comes easily. Plus, courtesy of having the most amazing daughter imaginable, I’m an RSD (Registered Super Dad), so I had a lot to draw upon.”

Inspired by Hawthorne's hit Christmas song, "A Tyrannosaurus For Christmas", I Want a Tyrannosaurus For Christmas brings a lot to the holiday table. It goes beyond just its incredible artwork, courtesy of artist Bojan Radovanovic, who was personally sought out by Hawthorne for this venture. Walt Disney artist Jason Zucker called the story a "Perfect read for young dinosaur fans who have always wanted a dinosaur of their own . . . filled with messages of kindness, giving, and friendship!"

“In addition to the adorable story that is the core of the book, I wanted to subtly explore and address issues that both kids and parents can relate to,” Hawthorne explained. “The holidays can be a tough time for many. Billy’s dad is away on another long business trip, he’s lost his pet iguana, and he’s forced to deal with bullies at the school bus stop each morning that like to pick on him and his best friend, Javier.”

In the story, Billy’s not the only one with problems. Up at the North Pole, Santa’s workshop is under siege by a mischievous baby Tyrannosaurus they’ve been forced to take in. Eventually, it’s decided by Santa’s head elf, Xavier – who has a unique plot twist of his own, which takes place later in the story – that “Tyron” the “Tyron-o-saurus” would be better off in the care of a particularly deserving and needy child: Billy. Of course, once taken in, Tyron grows by leaps and bounds, and by the time Christmas vacation is over he is literally as big as a house. His final reveal as Billy rides him to the school bus stop, where he and Tyron address the issue of bullying once and for all, is truly something to see.

I Want a Tyrannosaurus For Christmas is available via Amazon in both softcover and Kindle formats, and through Barnes and Noble in soft and hardcover versions.