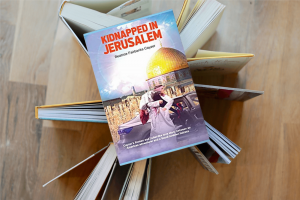 He gets leave from his ship to swim in Turkish waters, where he meets and falls in love with Myriam al-Montee, a half-Turkish half-Saudi Arabian Muslim woman.

Dennis McCleary, already correctly in his dry chauffeur’s outfit, had been leaning from one muscular leg to the other toward Daddy, with what was almost a threatening stance.”
— Beatrice Fairbanks Cayzer

GUADALAJARA, JA, MEXICO, December 7, 2021 /EINPresswire.com/ -- “Dennis McCleary, already correctly in his dry chauffeur’s outfit, had been leaning from one muscular leg to the other toward Daddy, with what was almost a threatening stance.”— Excerpt from Kidnapped in Jerusalem by Beatrice Fairbanks Cayzer.

Author Beatrice Fairbanks Cayzer will be one of the featured authors in the upcoming Guadalajara International Book Fair 2021 with her published book title, Kidnapped in Jerusalem. It is a tragic love story in a journey to the Arabian territories. The main character Dennis McLeary is a troubled and messed up man. When he grew up and had his freedom at 35, he was determined to be an upright man and hoped to have a peaceful marriage. Arriving in Turkey, he loves the place and finally meets and falls in love with Myriam al-Montee, a half-Turkish half-Saudi Arabian Muslim woman. They get married without knowing that the father of Myriam was a prejudiced father, who hopes to use her daughter to found his dynasty, and strict.

Consequences will happen, then, they hide from her father in Alexandria and Cairo and arrive in Jerusalem. A lot of events occurred after that. But fate holds more vicious challenges.

“It starts with a tone of misery and becomes a story full of suspense and intrigue, which inevitably leads readers to wonder if these two tortured souls will find love with one another once and forever. After all, everyone deserves a happy ending with the one they have fallen for.” — Reviewed by Aly Avina, Hollywood Book Reviews.

Beatrice Fairbanks Cayzer comes from an artistic family. She founded the Cayzer Museum for Children in England, where she was the wife of Stanley Cayzer, a grandson of Sir Charles Cayzer, founder of shipping companies that evolved into Caledonia Investments, and nephew of Admiral Lord Jellicoe, the second Governor-General of New Zealand.

When she came back to the USA, she wrote nine Rick Harrow novels, winning the Book of the Year Award from the Horseracing Writers’ Association. In 2016, she had a sell out with The Secret Diary of Mrs. John Quincy Adams and in 2018 had another sell out with New Tales of Palm Beach.

Authors Press is an online publishing company and book reseller catering to the needs of both experienced and aspiring authors as well as readers. They offer the best publishing solutions for full-time and independent authors. The company’s team of proofreaders, editors, designers, and publishing professionals are committed to achieve industry standards for their client’s work to be published, marketed, and sold.