Larry Hirschhorn publishes Grieving Aaron: Poems in Response to the Sudden Death of My Adult Son 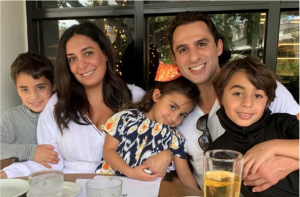 Aaron Hirschhorn with wife and three children shortly before his death

These poems are "achingly honest" "raw truth" "urgent" "intensely personal" "a comfort to those who have experienced great loss"”
— Harriet Lerner, Author, The Dance of Anger
PHILADELPHIA , PENNSYLVANIA, USA, January 3, 2022 /EINPresswire.com/ -- Larry Hirschhorn has just published a book of poetry titled, "Grieving Aaron: Poems in Response to the Sudden Death of my Adult Son." His son Aaron. died in a boating accident in Miami Bay at the age of 42. The poems were written over the course of three months and are presented in the sequence in which they were written. The poems express pure grief, the resistance to believing that Aaron is gone, the search for pleasure and meaning in the author's grandchildren, and the author's attempt to console his wife. The two last poems, the Piñata and One Last Time play counterpoint to each other. The former evokes an imagined sweet remembrance, the latter the anguish that memories create, seemingly forever. As Harriet Lerner, clinical psychologist and author of the Dance of Anger writes, "These powerful, achingly honest, and intensely personal poems are compelling testaments to a father's love and loss as he struggles to survive the sudden, unanticipated death of his 42-year old son, Aaron. The authenticity and urgency of these poems are a tribute to the son whose tragic passing occasioned them, and to the power of language to knit us together in the most difficult of times. While the poems capture the raw truth of unbearable pain they also remind us of the indestructible bond between a parent and a child. While offering no easy consolation, I believe they will comfort especially those readers who have experienced the depth of grief which is the price of great love.” Aaron Hirschhorn was a noted entrepreneur in Miami. Born in Philadelphia and schooled both there and in Los Angeles he founded DogVacay a pet sitting service which he later sold to Rover.com. He leaves behind a wife, three children ages six through nine, a brother and his parents. The book is available through Amazon at https://amzn.to/3qn7LSR