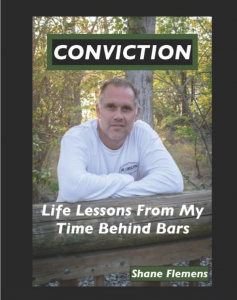 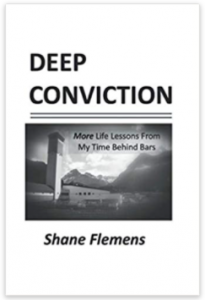 WENATCHEE, WASHINGTON, UNITED STATES, December 20, 2021 /EINPresswire.com/ -- In a follow-up to his inaugural book, “Conviction,” author and ex-convict Shane Flemens probes deeper into his own memories in a 2020 book titled “Deep Conviction.” With “Deep Conviction” Flemens opens up further about his decade spent enduring the harsh Alaskan correctional facilities of the United States prison system.

Beyond recounting the violent events in Kodiak, Alaska that led to his prison sentence in 2008, “Deep Conviction” expands Flemen’s narrative by looking more closely at his personal transformation. Readers get an intimate glimpse into the changes wrought in Flemen’s psyche, and his painful but liberating process of awakening and rebirth.

“Conviction,” Flemen’s first book, reads in part as a collection of interconnected stories exploring the psychological toll of the prison system and the challenge of finding purpose within a circumstance and environment engineered to fully subjugate its occupants.

In both works, Flemens recounts the range of experiences he endured while serving time inside Alaska and Colorado prison facilities and introduces readers to some of the individuals he grew to know and appreciate. In sharing these personal reflections, “Conviction” offers a distinct insider view into the world of prison life and takes a critical look at the United States’ often brutal correctional system—a system, as the book describes, “designed to punish…the light remaining in the hearts of men in need of help, guidance, and a second chance at life.”

With “Deep Conviction,” Flemens breaks down and analyzes his experience even further. He speaks even more revealingly about the day he stepped onto a fishing boat

in Kodiak and underwent the events that would ultimately lead to his first-degree assault conviction.

As shared with radio host Dave Bernstein, the stories within the books “were actually written by me when I was inside…then I hired a ghostwriter to help me get it out there in book form.” He goes on to describe how “there are a lot of hard things in there…but the story is starting to spread.”

When “Conviction” debuted, it reached Amazon’s top 100. The follow-up volume adopts a contemplative posture and moves a step beyond the stories of Flemen’s first book to consider the long-term impact of prison life on individuals and explores the possibility for new and better solutions to problems within the current system. “Deep Conviction” considers questions such as: If America contains 5% of the world’s population, why does it contain 25% of the world’s prison population? Additionally, why are 6 out 10 offenders who are released from Alaskan prisons back behind bars within three years?

Flemens shares, “I was in the maximum-security prison in Alaska—and I felt like I was in the devil’s lair. I started seeing people get hurt from trying to change… Then I started reading the bible a few years in and, one day, I started understanding the words. My whole life changed after that.”

In an effort to help other people facing similar difficulties, Flemens teamed up with Wenatchee Valley’s Stuff-a-Sackpack initiative. For this charity effort, volunteers prepared” sack packs” designed to be gifted to homeless or high-risk youth incarcerated within the Chelan County Juvenile Detention Center. The sack packs are given to these teens and young adults upon their release, and are filled with essential items and notes of encouragement from community members. Flemens gifted 20 copies of both “Conviction” and “Deep Conviction” as a way to help the young people move successfully into their own “second shot at life.”

Flemens frequently refers to a quote from Nelson Mandela, who stated that “a nation should not be judged by how it treats its highest citizens, but its lowest ones.” Anyone interested in receiving their own copies of “Conviction” and “Deep Conviction” can order signed copies through Flemen’s website shaneflemens.com.

Shane Flemens is a memoirist, entrepreneur, and prison reform advocate based in Wenatchee, Washington. He runs the landscaping and general contracting company ABE Landscaping and Maintenance, along with the watersport company Rise n’ Ride

Rentals with his daughter, Ashley. Flemens is passionate about transforming yards into beautiful retreats where people can spend their most valuable asset—time—with their families and friends. Shane is driven to affect positive change through his writing. He stands by the philosophy of asking hard questions and sharing truth. His three grandchildren, Lilly, Amaya, and Mateo, are the light of his world