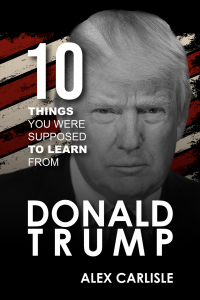 10 Things You Were Supposed to Learn From Donald Trump

Launching Today: 10 THINGS YOU WERE SUPPOSED TO LEARN FROM DONALD TRUMP by Alex Carlisle

It does not portray Trump as a saint or a sinner, but rather shows how he personified what was in the hearts and minds of many Americans.”
— Alex Carlisle, Author
UNITED STATES, November 22, 2021 /EINPresswire.com/ -- Donald Trump has had the distinct ability to shake things up and tread where no other man has tread before. Love him or hate him, he is not the kind of man you can just ignore.

Now author Alex Carlisle's debut book 10 THINGS YOU WERE SUPPOSED TO LEARN FROM DONALD TRUMP takes a practical approach to understanding some of Trump's most polarizing political and personal actions, hoping there will be plenty of takeaways for readers.

The book launches today. To celebrate, there will be a special live listening event and reading of the first three chapters of the audiobook at 8:00 PM EST. Go to the author’s website, https://alexcarlislebooks.com, to get the link and participate.

More than 500 quotes, newspaper articles and manuscripts were compiled to create a synthesis of almost 600 pages, focusing on the most dynamic, memorable, and poignant moments of Trump’s tenure as POTUS through the eyes of the author. The book looks specifically at how drastically different Trump went about his affairs, got things accomplished, and started new chapters out of the ashes when all appeared to be lost.

10 THINGS YOU WERE SUPPOSED TO LEARN FROM DONALD TRUMP is bold and unapologetic. It does not portray Trump as a saint or a sinner, but rather shows how he personified what was in the hearts and minds of many Americans. It is a razor-sharp look at how one man could make a difference living outside the boundaries – something few were able to do without being destroyed.

ALEX CARLISLE has always been extremely interested in politics and history.
He was born and raised in Chicago to an American father and an immigrant mother from Germany. Both parents worked as Union organizers and eventually became Union executives. He learned at an early age that progress takes planning and hard work. During his college years, he worked for a syndicated radio show and campus newspaper providing content. He would go on to produce shows for overnight radio programming in Southern Illinois.

After earning an MA in American History, Alex had a brief career in education before he branched out to start his own family business. Alex currently lives in a small town north of Indianapolis with his wife Molly, two children. and a golden retriever, Reggie, in a house within walking distance of his favorite Starbucks. He likes to socialize and explore the world with a different eye. Visit https://alexcarlislebooks.com.