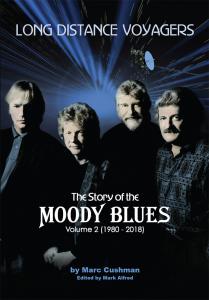 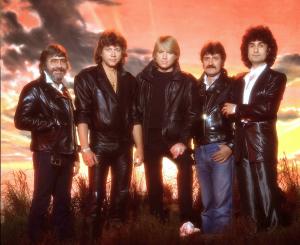 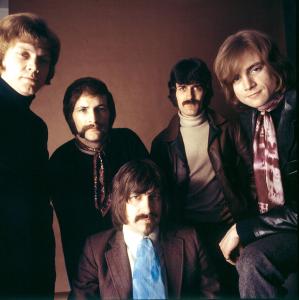 LOS ANGELES, CA, USA, November 22, 2021 /EINPresswire.com/ -- The second and concluding volume of "Long Distance Voyagers: The Story of the Moody Blues" from Jacobs/Brown Media Group enters release just two weeks after the passing of Moodies drummer and founding member, Graeme Edge, on November 11. Jacobs/Brown spokesman Steven Kates said, “The book was published two weeks ago, just days before Mr. Edge’s passing. But we held back our promotions out of respect for the family. This book is a great tribute to Graeme Edge and the Moody Blues.”

Volume 1 of "Long Distance Voyagers: The Story of the Moody Blues," which won an ARSC journalism award, was published in March 2018, the 50th anniversary of the North American release of the band’s historic album Days of Future Passed. Days was the rock era’s first concept album and the beginning of a new genre: symphonic rock.

“'Days of Future Passed' came out in England in November 1967,” said Marc Cushman, author of the two books. “This was five months after the Beatles’ 'Sgt. Pepper’s Lonely Hearts Club Band.' 'Days' was released in America in March 1968. Though some consider 'Sgt. Pepper' a concept album, it really doesn’t have a central theme linking the songs. 'Days' was the first to do so. Each song represents part of daily life’s 24-hour cycle, from ‘Dawn Is a Feeling’ to ‘Peak Hour,’ ‘Tuesday Afternoon,’ ‘Twilight Time,’ and ‘Nights in White Satin,’ to name about half the tracks. An album unified in this way had never been done. The Moodies followed it with an even more profound album, 1968’s In Search of the Lost Chord. Chord examined different paths to enlightenment, from religion to meditation, to astral planes, to dropping acid, to love, and the emotional influence of musical chords.”

More concept albums followed from the Moody Blues, including 1969’s "On the Threshold of a Dream" and "To Our Children’s Children’s Children," and 1970’s "A Question of Balance." These inspired other rock acts to make concept albums, such as the Who’s "Tommy" and "Quadrophenia"; Pink Floyd’s "Dark Side of the Moon"; David Bowie’s "The Rise and Fall of Ziggy Stardust"; Elton John’s "Captain Fantastic and the Brown Dirt Cowboy"; or the Alan Parson Project’s "I Robot." They all owed a tip of the inspirational hat to the Moody Blues.

The Moodies were also the primary pioneers of symphonic rock. "Days of Future Passed" featured a symphony orchestra. Afterward, the Moodies continued their symphonic sound by pioneering the use of the Mellotron, played by Mike Pinder, with flute and other woodwinds played by Ray Thomas. The balance of the rock combo was made up of Justin Hayward (guitars), John Lodge (bass guitar) and Graeme Edge (drums and percussion). The Mellotron, as modified by Pinder, stunned rock critics in England and the U.S. when brought on tour for the first time in 1968. Many reviewers admitted that they’d looked in vain for the orchestra they heard – until the sudden realization that the strings and horns were coming from “the orchestra in a box.” Pinder used the Mellotron to provide the symphonic sound on the next several studio albums by the Moody Blues into the 1970s, when synthesizers became commonly available.

Groups who picked up on the Moody Blues’ symphonic-rock style include Pink Floyd; Jethro Tull; King Crimson; Yes; the Electric Light Orchestra; and Emerson, Lake and Palmer. “Even the Beatles were influenced by the Moody Blues,” Cushman points out. “Mike Pinder turned them on to the Mellotron, which then appeared in songs like ‘Strawberry Fields Forever’ and ‘I Am the Walrus.’ The Moody Blues’ pioneering influences on rock music – from Mellotron to symphonic rock, to concept album – can’t be overstated or ignored.”

The popularity of The Moody Blues increased year by year from their No. 1 U.K. hit single “Go Now” in 1965 (which made the Top 5 in the U.S.) through a string of gold and platinum albums, and more than a dozen radio hits, including “Ride My See-Saw” “The Story in Your Eyes,” and the No. 1 hit single “Nights in White Satin.”

“Patrick refreshed the group’s sound, taking them from Mellotron to the latest synthesizers,” Cushman stated. “This put the Moodies back at the forefront of the rock scene. The music press was caught off guard as the group rebounded, hitting No. 1 yet again with both the album "Long Distance Voyager" and the single ‘The Voice.’”

As Volume 2 documents, it wasn’t until 1992, with a series of concerts at the Red Rocks amphitheater in Colorado, that the Moody Blues took the stage with an in-person orchestra, with real strings and horns augmenting the textures provided by Moraz.

“This was the first time the band combined with an orchestra since 'Days of Future Passed,' and the first time they did so on a concert stage,” Cushman emphasized. “The music press, who should have known this, were surprised. But you can hardly blame them. Listen to hits like ‘Question’ and ‘I’m Just a Singer (in a Rock and Roll Band.)’ The arrangements sound like a full-blown orchestra backing the Moodies. But all that orchestral wallop was coming from Mike Pinder and his out-of-this-world Mellotron.”

This second volume concludes with the group’s induction into the Rock and Roll Hall of Fame in 2018. “In 2019, they took a year off,” Cushman said. “The pandemic prevented any performances in 2020. With the passing of Graeme Edge, the Moody Blues story has likely come to an end. But for fans of pop and rock, their music and influence live on.”

"Long Distance Voyagers: The Story of the Moody Blues, Volume 2 (1980-2018)" is available from Jacobs/Brown Media Group.