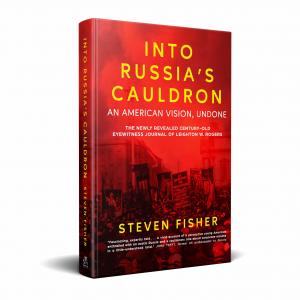 "Into Russia’s Cauldron" contains a warning from the past that resonates for today’s U.S.-Russia relationship

A cautionary tale about corporate naiveté in a little-understood land”
— John Tefft, former US ambassador to Russia
CHICAGO, ILLINOIS, USA, January 3, 2022 /EINPresswire.com/ -- The newly released book, "Into Russia’s Cauldron," by Steven Fisher, tells the dramatic story of an individual and America’s leading financial institution fighting the inevitable in Russia, a chronicle grippingly brought to life in the never-seen-before century-old journal of Dartmouth College graduate, Leighton Rogers. In 1916, the National City Bank of New York, the precursor of today’s Citibank, sent Rogers to Russia to join a mission to achieve American commercial preeminence–a vision set forth by Frank Vanderlip, the president of National City Bank, who enthusiastically declared, “Russia’s need for capital is like Sahara’s thirst for water.” National City Bank instead fell into a Russian revolutionary maelstrom. Leighton Rogers wrote down everything he saw and experienced. His journal contains an eloquent, fresh and riveting account of that tumultuous time and recounts the devastating outcome of a singularly failed mission.

Meticulously researched, "Into Russia’s Cauldron" addresses long-standing questions about Russia’s role on the world stage and conveys geopolitical lessons Leighton Rogers and his National City Bank colleagues learned one century ago that are compellingly relevant today.

For more information about "Into Russia’s Cauldron," to inquire about a review copy, or to schedule an interview, visit: