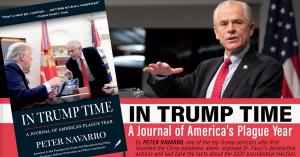 On The Schaftlein Report Peter Navarro announced the release of his innovative audio-book, In Trump Time -- with a just released "Big Reveal"

This first of its kind audiobook allows the listener to truly feel like they are experiencing history”
— Peter Navarro
IRVINE, CA, UNITED STATES, December 2, 2021 /EINPresswire.com/ -- Peter Navarro announced the release of his innovative audiobook, In Trump Time -- with a just released "Big Reveal" audio sample from the first "Red Wedding" chapter of the book.

Peter Navarro was a guest on the popular podcast The Schaftlein Report where he discussed the release of his new book, In Trump Time, Featuring Voice of President Donald Trump.

Read by author, Peter Navarro In Trump Time is the definitive insider's account of the Trump White House. This innovative audio presentation and dramatic production features the voices of numerous other people appearing in the book, from Corey Lewandowski, Steve Bannon, and Dr. Steven Hatfill to National Security Advisor Robert O'Brien, Anthony Fauci, and President Trump himself.

"This first of its kind audiobook allows the listener to truly feel like they are experiencing history," said Peter Navarro. "The unique addition of key voices makes this searing account of my time in the White House a must-hear for all Americans."

Peter Navarro is one of only three White House officials by the President's side from the 2016 campaign to the end of the President's first term. Always moving In Trump Time, as was his signature, Dr. Navarro's new book seeks to get to the bottom of what happened in a Wuhan bioweapons lab and hold Communist China accountable for its deadly role in the pandemic. This compelling audio presentation races along delivering new revelations in every chapter.

Peter Navarro holds a Ph.D. in economics from Harvard University and was a professor emeritus of economics and public policy at the University of California-Irvine for more than 20 years. He served as Assistant to the President and Director of the Office of Trade and Manufacturing Policy at the White House during the Trump Administration. He is the author of numerous books, including his China Trilogy: The Coming China Wars (2006), Death By China (2011), and Crouching Tiger (2015).

The Schaftlein Report, is hosted by political commentator Mark Schaftlein and produced in the Market Mover Media studio located in Irvine, California. Dr. Navarro’s interview can be heard on all major podcast platforms.

In Trump Time is available now on Amazon: https://www.amazon.com/Trump-Time-Journal-Americas-Plague/dp/1737478501

For more information about The Schaftlein Report or to become a guest visit the website at SchaftleinReport.com or contact Liz Martin at Liz@invictaconsulting.agency