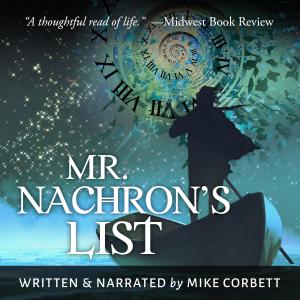 An exciting ride with vivid descriptions of exotic locations and lively characters from centuries past.

Who is the beautiful young leper that seduces Ron during his unintended trip to Panama?

Why would Richard Feynman, a noted twentieth-century physicist, pick up Ron hitchhiking in a New Mexico desert?

If you knew that there was something on the other side of a door that shouldn’t logically exist, would you go through it? Ron Maddock wasn’t the type of person to back slowly and sensibly away. It wasn’t just curiosity. His compulsion to cross that threshold was fueled by an appetite for stimuli that his normal routine wasn’t providing. Suddenly, Ron entered a world where the passage of time and a sequence of events were out of order.

He wasn’t facing this strangeness alone. Two strong women and a peculiar little man provided the incentive and the means to navigate an improbable array of obstacles. In Mr. Nachron’s List, Ron Maddock discovers that some of the most vivid images of a modern world may be found in artifacts of an older one.

“Mr. Nachron’s List” is an enjoyable surreal adventure of time travel and exploration of a world that is captivating. A short tale fraught with complications and fascinating characters. This is one of those interesting books that you don’t necessarily see the ending or plot twists coming…. If you are a fan of surrealism and quirk, this is a definite must listen.” AudioBookReviewer.com

Along with “Mr. Nachron’s List” and “Laughter of the Damned” (a satirical sendup of heaven and hell), Mike Corbett has authored tactical books on poker and backgammon. He is fascinated by the wavering border between reality and fantasy and he is a master of the transition from observation to interpretation. Corbett established an international reputation during decades of high level game competition in addition to providing entertaining lectures and contributions to periodicals on game theory.