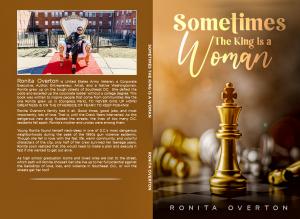 Sometimes The King is a Woman - Book Cover

As a survivor of the streets of Southeast DC, Overton is a US Army Veteran, corporate executive, music artist, and entrepreneur.

As I always say, push through and don’t give up, greatness is on the other side of fear.”
— Ronita Overton
OXON HILL, MD, UNITED STATES, December 28, 2021 /EINPresswire.com/ -- Ronita Overton’s debut book Sometimes the King is a Woman gives a personal account of the crack epidemic that ravaged Washington DC’s neighborhoods in the 1990s. Telling the story of a dramatic switch in her family life, Overton’s first book chronicles her family’s descent from having happiness and successful jobs to a life impacted by dangerous drugs and violence that swept across the city.

Overton’s debut cements her legacy as an advocate and a role model. As a survivor of the streets of Southeast DC, Overton is a US Army Veteran, corporate executive, music artist, and entrepreneur. “Having lived through the culture in Washington DC at the peak of the crack epidemic, I am motivated to create inspiration for people of all socioeconomic and ethnic backgrounds,” says Overton.

“With an experience that is relatable to many in disadvantaged positions today, I hope that my success in the army as a member of the LGBTQ community, my achievements in corporate America, and my own artistic career can provide hope to those in similar situations.”

In many ways, Overton has defied all odds, and her new book is an outlet for readers to access her universal story of triumph, dreams, and overcoming obstacles. “I hope that readers of my book and listeners to my music or viewers of my art take my example as proof that it is possible to achieve one’s dreams. As I always say, push through and don’t give up ‘Greatness is on the other side of fear.’”

Sometimes The King is a Woman is the latest feat in Overton’s artistic career that spans writing and Hip Hop and has landed her media appearances in Urban Magazine and on The Chelley Roy Show.

Ronita Overton is a United States Army Veteran, Corporate Executive, Author, Entrepreneur, Artist, and Native Washingtonian. She defied the odds and excelled up the corporate ladder without a college degree. Then, at 40, she pivoted to become a rapper and author. She wrote her debut book, *Sometimes the King is a Woman*, to share her story in hopes of inspiring others from communities like hers.

Ronita grew up on the tough streets of Southeast D.C. at the height of the crack era. She left her hometown for the first time after graduating high school and joining the military. As a gay woman in the military during the "Don't Ask Don't Tell" period, Ronita has her fair share of stories to tell! After her time in the military, she found success in corporate America, despite not having a college degree. Now, Ronita spends her time performing as a rapper and telling her story to uplift others.