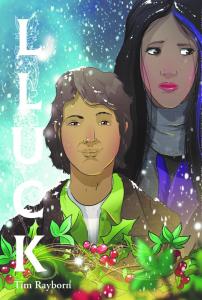 Cover of LLUCK, the second book in the Qwyrk Tales series 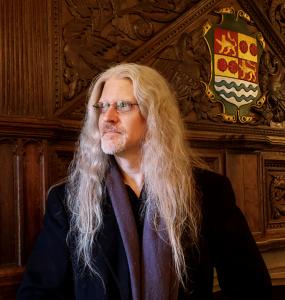 Wacky… twisty… the dialogue is a demented fruitcake of British humor, and you won’t be able to stop turning the pages.”
— Diana Paxson, author of Sword of Avalon
BERKELEY, CALIFORNIA, UNITED STATES, November 24, 2021 /EINPresswire.com/ -- The release of Tim Rayborn’s LLUCK marks the second installment of the adventures of a group of misfits at the edge of reality in modern northern England. In QWYRK TALES, Rayborn has created a world of shadows, Nighttime Nasties, witchy magic, remarkable Indian Fae, would-be superheroes, a lazy Komodo dragon, and elves—and it is filled with Monty Pythonesque humor. Also the author of the popular non-fiction titles BEETHOVEN’S SKULL and SHAKESPEARE’S EAR, Rayborn has created a series that will ultimately include two more novels—CHANTZ and FAYTTE—to be released in 2022 by the Thousand Acres imprint of Armin Lear Press.

All Qwyrk wanted was a few winter days of rest and relaxation in the small town of Knettles in Yorkshire, but of course, it all goes wrong immediately. She’d like to spend time with her young human friend, Jilly, but Jilly and her not-so-imaginary friend Blip have met a remarkable boy named Lluck, who seems to be able to bend events to his favor.
Lluck is on the run from two big goblins with unnatural powers. On top of that, Qwyrk meets a mysterious and enchanting woman who’s also looking for the boy. And hiding in the darkness, something else wants Lluck for itself, but why?

Pre-publication reviews give insights into the magic and mischief that Rayborn has created:

“Qwyrk and Jilly are back, on a new crusade to save a boy named Lluck who is having some rather bad luck in Leeds. Once more evil forces are on the move, and an unlikely alliance of Otherworldly beings and mortals are the only defense. The worldview is wacky, the plot line is twisty, the dialogue is a demented fruitcake of British humor, and you won’t be able to stop turning the pages.”
~ Diana L. Paxson, author of Sword of Avalon

“Qwyrk is back along with Jilly, Blip (pardon me, Mr. Blippingstone) and friends for another adventure! In this tale, we get a deeper glimpse into Qwyrk’s world, discover a boy of unusual circumstance and talent, learn more about Jilly’s background, and there’s even a fabulous queer love interest, all tied into a race against the clock to save the world from a nefarious being. Tim serves up another fun romp through a well-built world, full of wit, mystery, and magic!”
~ Laura Tempest Zakroff, author of Anatomy of a Witch

“Tim Rayborn does an outstanding job of expanding this magical world and the challenges posed by changing friendships and adversity alike. His ability to explore both outer and inner battles and bring to life a realm of magic that overlays reality and involves a number of characters in life-changing events will attract all ages, from advanced elementary children through adults. Tim Rayborn’s series is fun, lively, unexpected, engrossing reading. Lluck is just as highly recommended as its predecessor, adding another series of encounters to an involving fantasy series.”
~ Donovan’s Literary Services / Midwest Book

Tim Rayborn is an internationally acclaimed musician who plays dozens of unusual instruments. He has appeared on over forty recordings, and his musical wanderings and tours have taken him across the US, all over Europe, to Canada and Australia. Rayborn is the author Beethoven’s Skull and Shakespeare’s Ear, among other works, and co-authored Weird Dance with dance instructor/performer Abigail Keyes. He earned his PhD from the University of Leeds and currently lives in Berkeley, California.

About Armin Lear Press
Armin Lear was founded in 2019 with the purpose of publishing books connecting people with ideas that make our lives richer, more fulfilling, and happier. Its founders have 27 years of publishing experience. The company headquarters is near Boulder, Colorado with a production office in Arlington, Virginia and a design team based in Boston. Armin Lear is a member of the Independent Book Publishers Association and distributes its books worldwide in English through Ingram.